Volkswagen has revealed the modern and minimalist new interior design of its first electric SUV ahead of the all-new Volkswagen ID.4’s world debut on September 23.

Borrowing heavily from the mechanically similar Volkswagen ID.3 hatchback, the ‘floating’ dashboard design of the Volkswagen ID.4 features a free-standing central touch-screen and digital instrument cluster, to which the gear selector is attached.

Described by the German car-maker as a flowing, lightweight design that emphasises the car’s spacious interior and adds elegance to the cabin, the striking new dash will be accompanied by a light strip below the windscreen dubbed ID. Light.

Volkswagen says it ID. Light will support drivers in a variety of situations with intuitive lighting effects in different colors, like when the vehicle’s drive system is active and that the car has been unlocked or locked, and by accentuating information from the driver assist, navigation and infotainment systems by signaling braking prompts and incoming phone calls, for example. 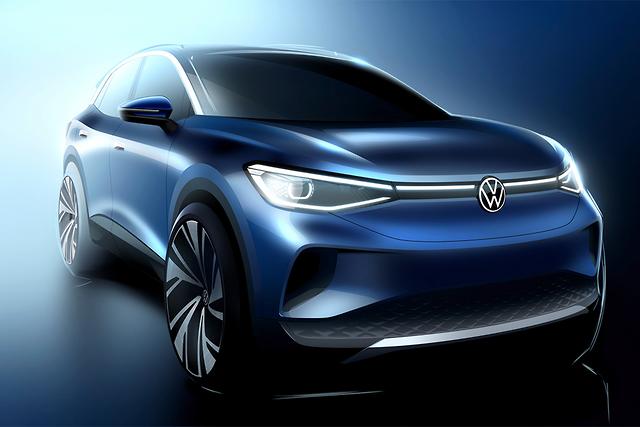 Highlighting the clean, futuristic design will be options including a fixed panoramic glass roof and a 30-color ambient lighting system that can be adjusted to underline the cabin’s main features at night.

“Freedom on the outside, free space on the inside,” said Volkswagen Group Design chief, Klaus Zyciora, who oversaw the ID.4’s design in his former role as Head of Volkswagen Brand Design. 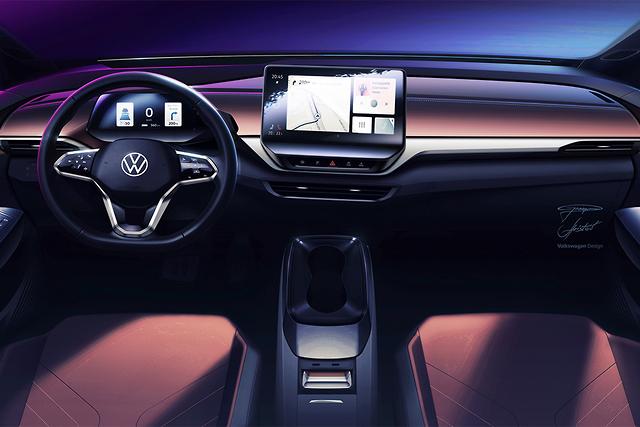 “The ID.4 brings a new sense of space to its category thanks to the new MEB platform, our modular electric drive matrix.”

In its most recent media release, Volkswagen also said occupants will enter the ID.4 cabin via flush-fitting exterior door-handles with electric unlocking and large door openings.

The five-seat Volkswagen ID.4’s seating position will be higher than the ID.3’s thanks to its extra ride height and the SUV’s cargo area behind the rear seats will be a massive 30.3 cubic feet (858 litres).

Its basic dimensions were leaked in June, revealing it will be roughly the size of Australia’s top-selling SUV, the Toyota RAV4, at 4592mm long and 1852mm wide.

In Europe, the battery-powered Volkswagen ID.4 will initially be launched in rear-wheel drive form, with an all-wheel drive version to be added a later date.

Three lithium-ion battery choices will be offered – 45kWh, 58kWh and range-topping 77kWh. The biggest and most expensive battery offers a maximum claimed range of around 500km (WLTP) on a full battery charge. The German giant’s first fully-electric SUV will initially be sold in Europe, China and the US. Pre-production of the SUV has already started in China and Germany, and is scheduled to get underway in the US in 2022.

The Volkswagen ID.4 was originally due to be the first ID model sold in Australia, as soon as next year, the brand’s local outpost now says only that it hopes to start seeing the first members of the new VW ID model family here from late 2022, pending overseas demand.

Volkswagen Group has committed to spending 33 billion Euros (about $A54.5b) on e-mobility out to 2024. It is expecting to build 1.5 million EVs annually by 2025 and is also aiming for complete carbon neutrality by 2050.