Every seasoned Route 66 traveler knows where to find the best food. Burgers, barbecue, hot dogs, burritos, pancakes and pie — that’s the fuel of classic road trips. We draw comfort from the simple flavors and retro charm of highway diners and cafes.

But there is one stop on the Mother Road that has absolutely nothing to do with simplicity. It’s a chance to slow down, to savor, to sample the flavors of the Colorado Plateau and to celebrate a wide range of cultures. If you don’t dine at the Turquoise Room in Winslow, you haven’t experienced the best of what Route 66 has to offer.

Housed in La Posada Hotel, the Turquoise Room is known for contemporary Southwestern cuisine using fresh and locally sourced ingredients. This is where you’ll find paper-thin piki bread from the Hopi mesas, tepary beans harvested by the Tohono O’odham people, Navajo-Churro lamb raised on the Navajo Reservation, wild mushrooms foraged from the San Francisco Peaks, goat cheese from nearby farms, native greens from the desert, vegetables plucked from the restaurant’s garden, elk, bison and, oh yeah, juicy burgers sizzling on the grill.

Now, after 20 years, the man who created this diverse culinary oasis will walk away.  Chef John Sharpe, a James Beard Award semifinalist, retires Sept. 30. He and his wife Patricia look forward to spending time with family and friends.

“When Patricia and I arrived we were often told that a fancy dining place in Winslow would never make it,” Sharpe says. “Today we are proud to have succeeded in spite of the challenge.”

Succeed they did. The Turquoise Room has received numerous accolades, including being rated one of the Top 5 hotel restaurants in North America by Conde Nast. In 2011 and 2012, Sharpe was a semifinalist for a James Beard Award in the Best Chef: Southwest category. Not bad for someone who never planned to come to Winslow at all.

During the 1870s, Fred Harvey did more to civilize the Wild West than anyone with a six-shooter.

In a time when train travel meant going days without decent grub, Harvey established dining rooms and hotels known for cleanliness, impeccable service and outstanding food. He even instigated the shocking practice of hiring young women as servers. They soon became known as Harvey Girls.

La Posada – the Resting Place – was designed by legendary architect Mary Colter in 1929, and while she is best known for her hotels in the Grand Canyon, she considered this Arizona hotel to be her masterpiece. (Photo: Daniel Lutzick)

La Posada Hotel, opened in 1930, was one of the famed Harvey Houses. Designed by pioneering architect Mary Colter, the opulent Spanish-style hacienda was the finest hotel on the Santa Fe line and became a magnet for the rich and famous. It was the only project for which Colter designed the buildings, decorated the interiors and planned the gardens. She considered the hotel her masterpiece.

But rail travel declined and La Posada closed in 1957. After being gutted and serving as offices for the Santa Fe Railway, it sat empty for years. It was destined for a date with the wrecking ball in the early ‘90s. That’s when Allan Affeldt, his wife Tina Mion and partner Dan Lutzick came to the rescue.

After three years of negotiations, they were finally able to purchase the hulking shell of a building. Restoration began immediately — a massive undertaking. Affeldt knew the hotel needed a restaurant, so he called old friends. John and Patricia Sharpe came to visit in January 2000.

At the time, Sharpe was running four acclaimed restaurants in Orange County, California. When the Sharpes arrived in Winslow, they thought they had made a wrong turn.

“We had no plans to move here,” Sharpe says. “The idea never crossed our minds.”

Yet they were intrigued by La Posada, the history and the vision Affeldt had for recreating the hotel’s lost elegance. Once Sharpe studied tourism numbers for the region, his interest grew.

“There was no chef-driven restaurant between Flagstaff and Albuquerque. I felt that if we created a destination dining option we would succeed. We had the building on Route 66 with a view of the trains, in a small rural town put on the map in part due to a popular song — the perfect place for a rest stop. It felt worth the try.”

‘I cook with what nature presents me’

Open and airy like the rest of La Posada, the Turquoise Room harkens back to a bygone era. Servers are dressed in white shirts and black pants, a contemporary take on the uniforms once worn by the Harvey Girls. Exposed ceiling beams are painted a blend of blue and green, a calming hue that seems appropriate in a hotel known as “The Resting Place.”

The Turquoise Room, in Winslow’s La Posada Hotel, is considered one of the finest in northern Arizona. (Photo: Courtesy of Dan Lutzick)

Tables and booths are carefully spaced, topped by colorful vintage place mats designed by Patricia. Southwestern art and Navajo rugs line the walls. Windows overlook the shady grounds to the railroad tracks out back where trains still rumble past.

Millions of visitors drive across northern Arizona each year. Many are bound for Grand Canyon; others are getting their kicks on Route 66. Pre-pandemic, both destinations have been wildly popular with international travelers.

The world comes knocking and Sharpe rewards them with flavors unique to the region. Born in a fishing village on the North Sea coast of England, his family grew and raised nearly everything they ate. It was a lesson he carried into his professional life.

“I cook with what nature presents me, no matter where I am.”

In Winslow, that means not just working with local farmers and ranchers but rediscovering and celebrating the region’s ancient food traditions. For example, the Turquoise Room is the only restaurant serving Navajo-Churro lamb every day.

This heritage breed of sheep is prized by Navajo people for its hardiness, resistance to disease, carpet-quality wool and lean flavorful meat. Yet the Churro teetered on the brink of extinction after government-mandated flock reductions and crossbreeding programs. By providing a consistent outlet at the restaurant, Sharpe has helped raise awareness of the breed and fostered its sustainable production.

What’s next for the Turquoise Room?

The good news is that Sharpe’s legacy will continue. Allan Affeldt, owner of La Posada, has purchased the Turquoise Room. Sharpe’s entire well-trained staff will stay on and no menu changes are predicted. 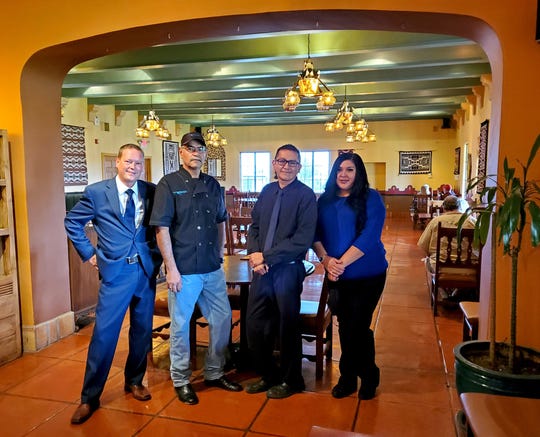 The entire staff of the Turquoise Room will continue at the restaurant after chef John Sharpe retires. From left: Johnny Jackson, Jesus Nunez, Dennis Burbank and Tanita Tso. (Photo: Courtesy of Dan Lutzick)

“Having John and the Turquoise Room here for 20 years has meant everything to us,” Affeldt said. “Working together we resurrected La Posada and Winslow as a destination. We could not have done this without John’s enormous talent, effort, creativity and risk. And his English charm.”

Restoration and improvements continue at La Posada Hotel. Five new rooms are under construction and should be open by spring. The former train depot has been converted into a lovely Route 66 museum, and a chef’s garden is being added outside the kitchen, bringing even more freshness to the dining tables inside.

As for the man who created the acclaimed Turquoise Room, it doesn’t sound like another restaurant is in the future.

“We plan to retire so as to be able to smell the roses. It’s as simple as that,” Sharpe said. “After so many years of hard work, working every holiday, never spending time with family and friends, now we can experience this and be so very grateful for each and every day we have to enjoy life.”

Travelers have until the end of September to stop by and bid farewell to the Sharpes.

Take a high-country drive to Winslow. Visit Standin’ on a Corner Park, Route 66’s most iconic corner, which is just steps from La Posada. Then treat yourself to a memorable meal at a restaurant unlike any other on the Mother Road.

The Turquoise Room at La Posada Hotel is open daily for breakfast, lunch and dinner. Seating is limited and reservations are advisable. See the restaurant’s COVID-19 precautions on the website. 928-289-2888, http://www.theturquoiseroom.net.