The company’s hot food game, though, could use a little work.

If you’re looking for a quick 7-Eleven-style bite — affordable, convenient, but not exactly gourmet — then Amazon Go Grocery fits the bill. But I probably won’t be seeking out “Amazon Kitchen” for my next meal.

The 7,350-square-foot store in Redmond is larger and offers something new: a hot food section. I dropped by a little after lunchtime this week and there were several options: burritos, sandwiches, chicken tenders, chicken wings, soup, rotisserie chicken, pizza, racks of ribs. Amazon offers breakfast items such as wraps and oatmeal in the morning. 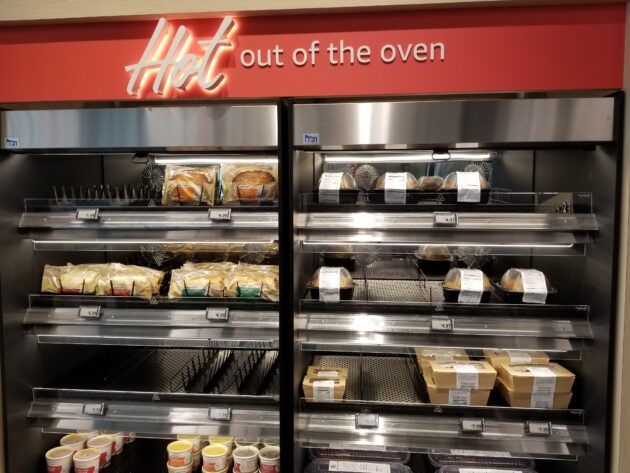 I grabbed some items and just walked out. I’m still not used to the surveillance-style shopping, with Amazon’s cameras tracking my every move. It’s such a weird feeling not paying for items at a register, then seeing a receipt on my phone with exactly everything I bought. The technology is impressive.

But Amazon’s hot food prep? Not so much. 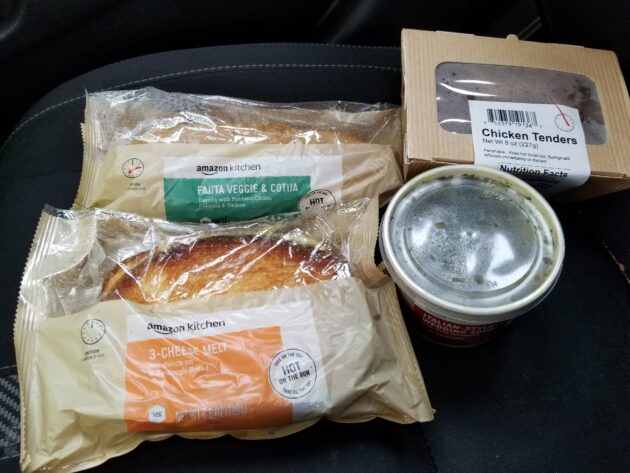 I started with the $4.99 soup, which was slightly warmer than lukewarm — not quite hot enough for me. The broth was flavorful and mild, without too much salt. The “Italian-style meatballs” were small, but added to the heartiness, along with onions, spinach, and pasta. This wasn’t much better than a canned soup, but I didn’t mind it. My rating: 3 out of 5.

Next up was the $6.99 fajita veggie and cojita burrito. It wasn’t wrapped tight enough, or perhaps could have used more filling, so the burrito was a little flimsy. But the tortilla was solid — not too soft, but not too soggy — and the beans-to-cheese-to-veggies ratio was proper. I could taste the seasoning on the rice. This was better than a microwavable burrito, but probably on the same level of Taco Bell, and not quite as bulky or satisfying as Chipotle. My rating: 3.5 out of 5.

Third on the menu was the $4.99 3-cheese melt. It looked promising but the bread was way too chewy and hard to eat. The cheese also didn’t melt well. The sourdough bread did taste good, though. This one is tough to perfect as a hot food item — you need to eat immediately after cooking, or else it loses its luster. My rating: 2 out of 5.

I finished off my Amazon Kitchen experience with four chicken tenders, sold at $3.99. These are hard to mess up. I liked the balanced breading seasoning, and the white meat chicken was solid. I wish I had some BBQ or honey mustard sauce. This ain’t Popeyes or Chick-fil-A, but I would eat it again. My rating: 4 out of 5.

Overall, I wasn’t impressed with Amazon Kitchen’s hot food, nor was I disappointed. It’s on par with what you’d find at the hot food section inside your local supermarket. Not exactly healthy or the best ingredients, but satisfying comfort food that you can grab on the go, and won’t break the bank.

Amazon has offsite kitchens where it prepares food, and a majority of the hot items are heated in-store daily. The rotisserie chicken is cooked in the rotisserie oven in a back-of-house kitchen.

Amazon also sells cold food items, including ready-to-heat and ready-to-cook options, at both Amazon Go Grocery locations. Many of those come from local providers such as Beecher’s or Carso’s.

This is not Amazon’s first foray into breakfast, lunch, and dinner. The company started selling pre-packaged meal kits in 2017, similar to what Blue Apron and others offer. It also owns Whole Foods, which have impressive hot food bars around the country.

There is also a prepared foods section at the company’s first Amazon Fresh grocery store that just debuted in Woodland Hills, Calif. That location features high-tech shopping carts and is part of Amazon’s growing grocery footprint.

Groceries are an estimated $678 billion U.S. market, and as they go increasingly digital, Amazon continues to invest heavily in both physical and online options three years after acquiring Whole Foods for nearly $14 billion in 2017. The company saw online grocery sales triple year-over-year during the second quarter of this year as more customers get their groceries delivered versus going to a physical store amid the COVID-19 pandemic.

The hot food is a nice addition to the Amazon Go Grocery concept, but the tech giant should bring on a few cooking experts if it wants to take its latest culinary endeavor to the next level.

But for now, it’s still Day One for Amazon Kitchen — and not in a good way.