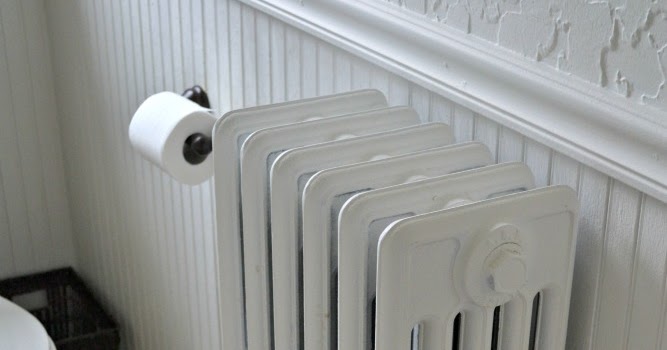 It’s been a long time since I’ve given our master bathroom a facelift and since I was so happy with the Simply White paint I chose for the kitchen, I wanted to extend that color to our master bathroom, as well.  A cool find from hubby also played a part in giving this room a redo. 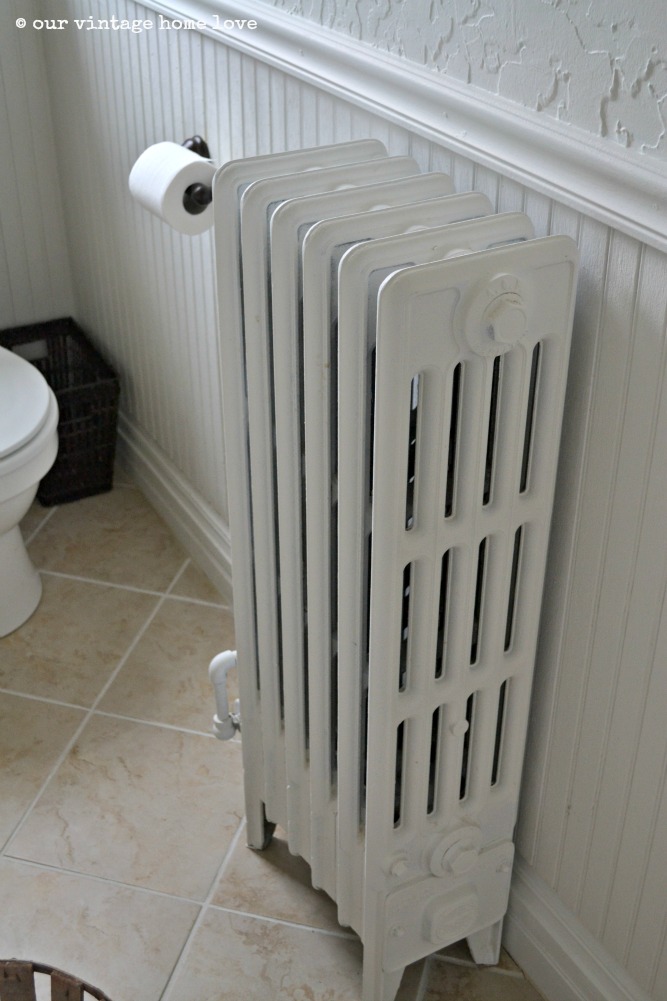 I know there are lots of folks that don’t like radiators or that want to cover them up but not me.  I love the cast iron and view them as a piece of art.  There weren’t any old radiators in our 100 year old home when we moved in and I never really cared that much until I started seeing really cool versions of them.

And as luck would have it, hubby was given several radiators a few weeks ago.  A couple of them were huge and so heavy that they maybe would have put a hole through our floor so I chose this small one.

I cleaned it up, primed it and then painted it Simply White as well.  I really love it and actually wish it was a working radiator.  That inspired a redo, so I pulled things from around the house, picked up a few things and repainted Benjamin Moore’s Simply White to give it a new look. 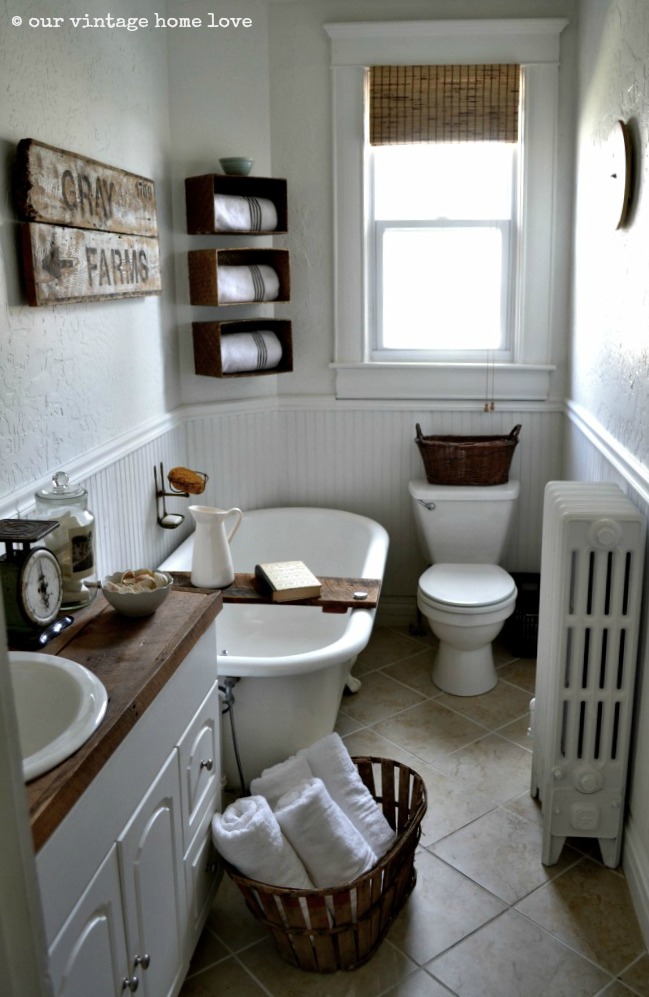 As you can see, our master bath is small.  But that’s okay, I love it anyway.

For the counter top, I wanted to add a few things to give it a masculine touch as well since my hubby also shares this bathroom.  So, I picked up a vintage shaving mug and brush, as well as a vintage wood leather straight edge sharpener.  It reminded me of a bread board so of course I had to use it.  🙂  For fun, I found an old photo of a barber shop price list online, printed it off and framed it. 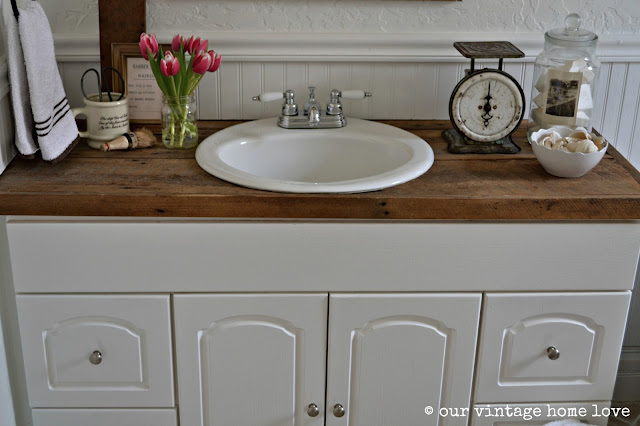 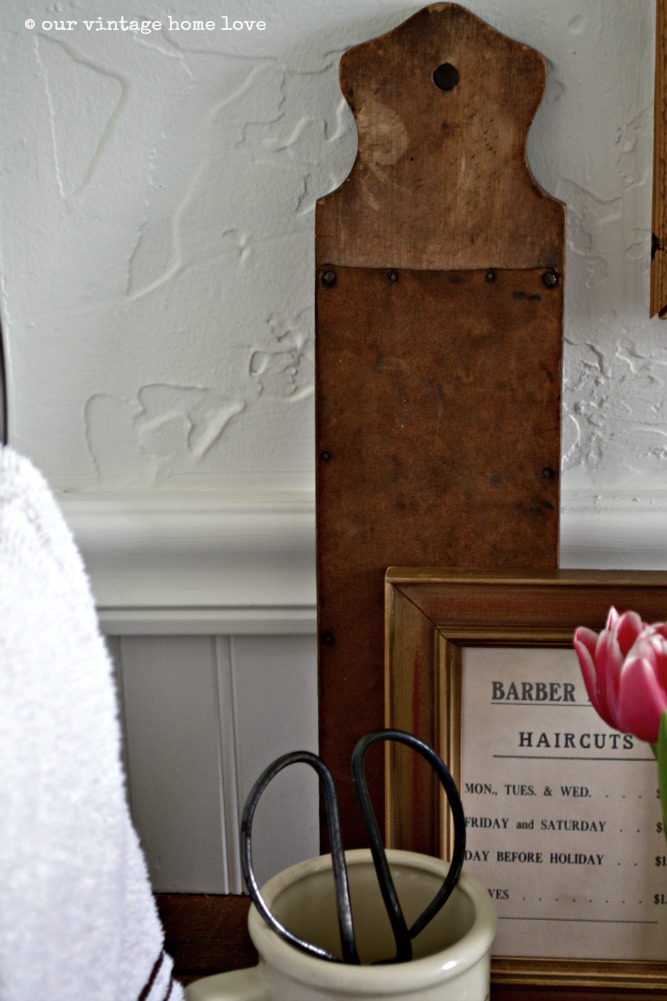 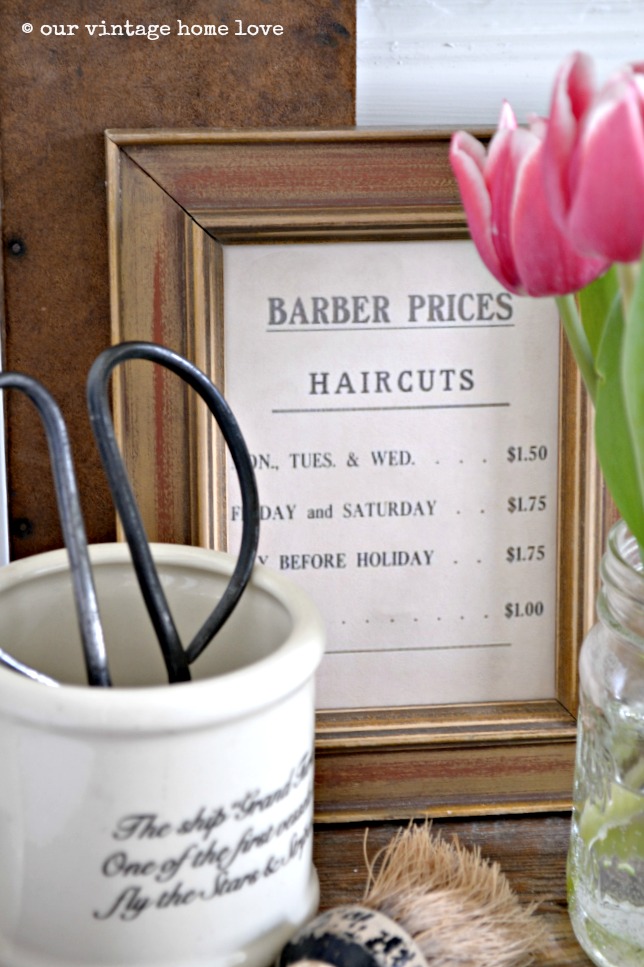 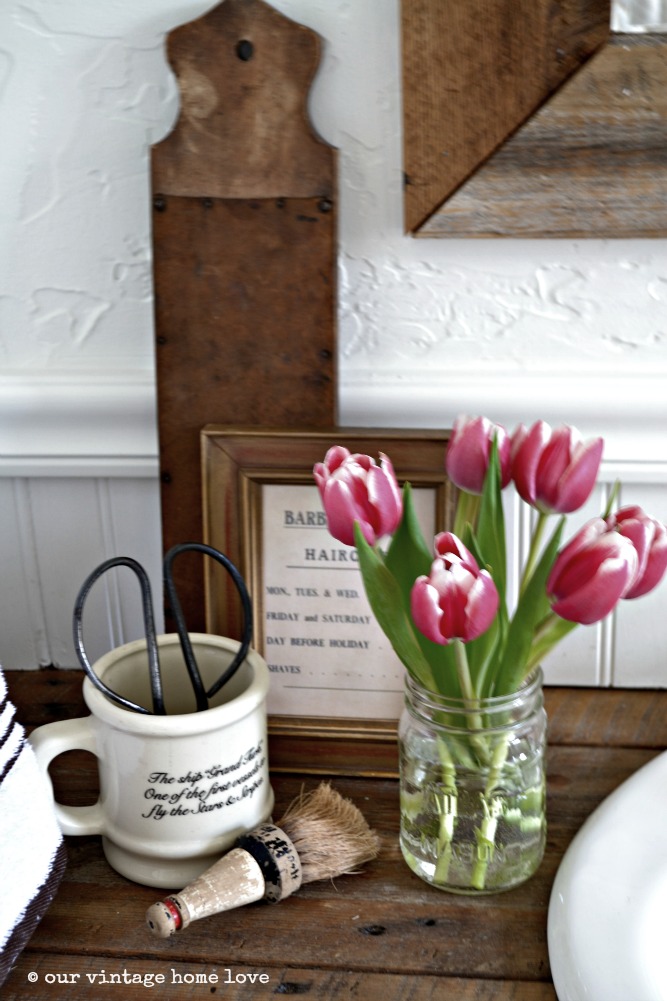 I love the patina on the wood handle of the old shaving brush. 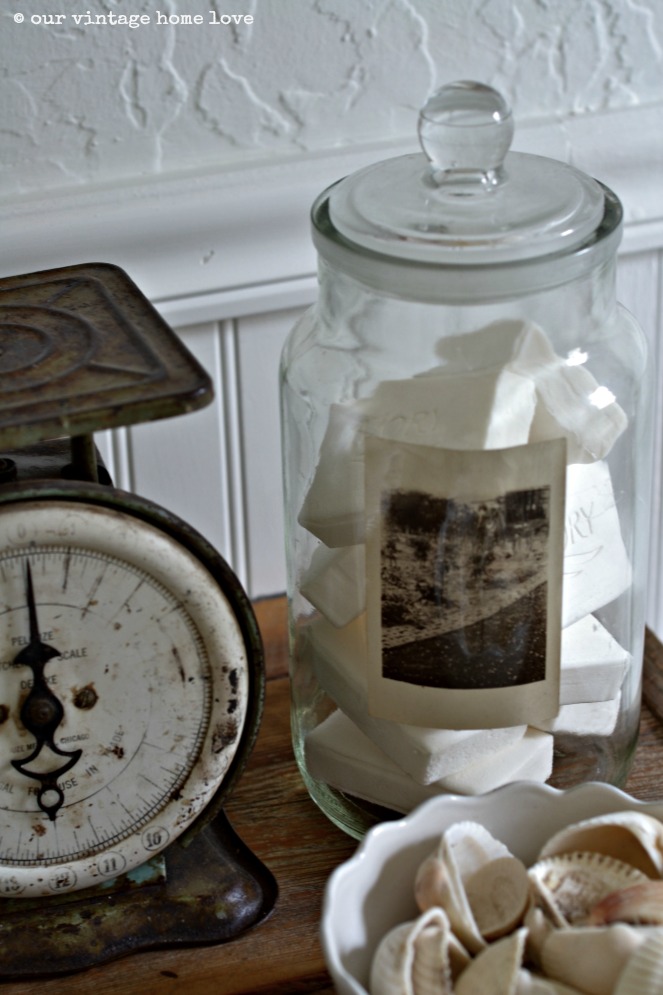 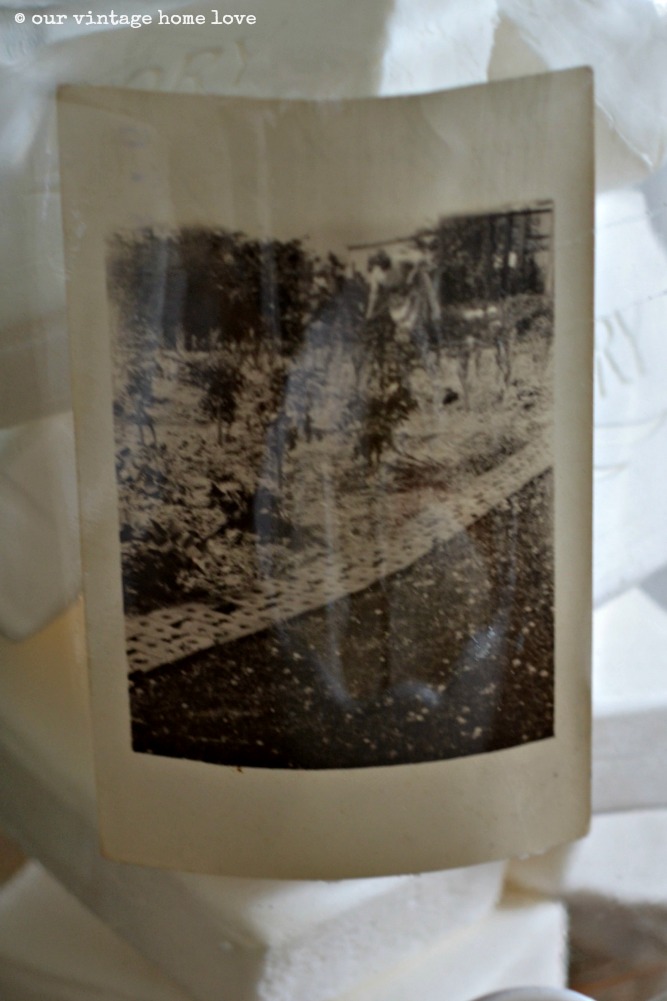 For the other side of the vanity, I attached an old photo I came across in a flea market to the inside of an old apothecary jar that I filled with soaps.

I was drawn to the old photo because, if you look closely, and I did with a magnifying glass, it is a woman working in her garden, tending to her tomato plants.  And this was written on the back…..it makes me smile. 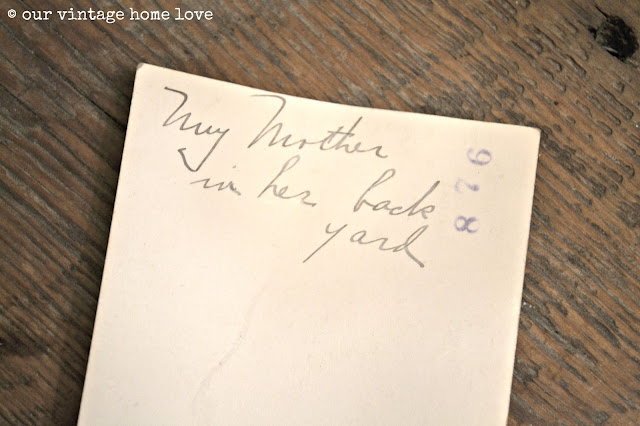 I pulled this very fragile vintage fruit basket from the dining room and filled it with white fluffy towels for beside the tub.

I mentioned before in our previous master bath redo that we don’t have a shower in here.  Our only shower is upstairs.

We use this bathroom for taking long soaks in the tub so I try to make it as peaceful and comfy in there as I can so that whoever takes a soak in there, will feel relaxed and special. 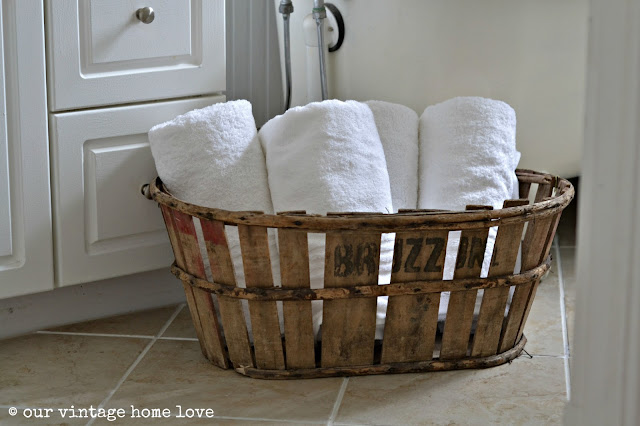 Some time this past spring, I had my annual realization that if I wanted to plant a garden this year I should have got started weeks, maybe months, earlier. Then I set about my annual task of Googling how to make a garden happen. A few days later, clearing out my hundreds of open browser tabs of horticultural-advice forums, I paused over an open Web page that I hadn’t noticed: a grainy upload on the mysterious and vaguely European video-hosting Web site Dailymotion. “The Victorian Kitchen Garden – S01 – E01 – The Beginning,” it said. Curious, I pressed play, and a gentle wave of clarinet arpeggios sounded from my laptop speakers, and a mist-veiled greenhouse appeared on the screen. My breathing slowed, my jaw unclenched.

After watching several episodes in a row, sinking deeper into relaxation with each passing half hour, I paused to confirm that the show was real and not a coping mechanism conjured by my subconscious to soothe my then-acute anxieties about the then-new coronavirus pandemic. “The Victorian Kitchen Garden,” it turned out, was not only real—a documentary miniseries produced, in 1987, for BBC2—but had been something of a sensation at the time of its release. It follows a master gardener, Harry Dodson, through his yearlong attempt to revive the long-fallow walled garden of Chilton Lodge, a country estate in Berkshire, using entirely Victorian-era plants, tools, and methods. Each of the series’ thirteen parts (an introductory episode, and then one for each calendar month, January through December) is narrated, on- and offscreen, by Peter Thoday, a mustachioed horticulturist whose elbow-patched tweeds and air of perpetual wonderment harmonize wonderfully with Dodson, a plainspoken sixty-something man with cheeks as pink as rhubarb, who drops his “H”s and works the soil in a shirt and tie.

The two men unhurriedly introduce viewers to the particularities of Victorian horticulture—much of it drawn from “The Beeton Book of Garden Management,” a companion to the enduringly popular “Mrs. Beeton’s Book of Household Management,” the author of which Thoday persistently, and endearingly, miscalls “Mr. Beeton.” The grand experiment begins on a frigid January morning, as Dodson and his hardy assistant, Allison (“recently qualified in fruit culture,” Thoday informs us), dive into resurfacing the garden’s original gravel paths, pruning apple trees, and planting boxwood to line the rows. As the months unfold, from one episode to the next, Thoday and Dodson wander and converse, marvelling at peaches and tut-tutting at wilted, overwintered broccoli. As he narrates the progress of the garden, Thoday offers historical asides and rambling side journeys to illustrate the exquisite ecosystem of flora, weather, manmade structure, and labor that went into Victorian horticulture: warmth-giving garden walls containing hidden furnaces, seed catalogues spanning hundreds of pages, and the game-changing “patent India-rubber hose,” which liberated gardeners from the literal burden of the watering can.

Dodson’s role isn’t just to run the throwback garden—he also provides a human portal to the heyday of such an operation. Born into a family of manor-house gardeners, Dodson