The students laid wooden boards, screwed them into formation and filled the newly created boxes with compost. This garden will be a tool for active learning for the rest of the year.

“A teaching garden is different than a community garden in that you’re linking all of the educational pieces of their STEM day or their language arts or history to this garden, so it’s literally a living laboratory,” said Cindy Heidelberger Larson, Ground Works associate executive director.

By letting students get involved in every step of the process, from construction to harvest, they can practice what they’re learning in real time. 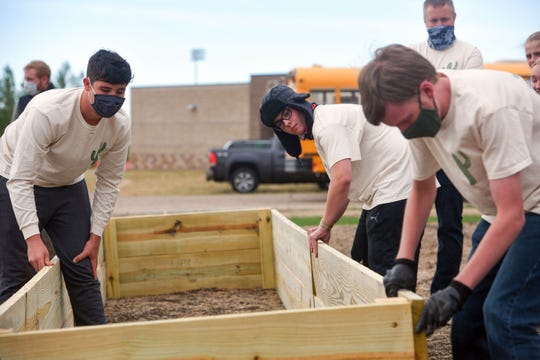 Ground Works has assisted in creating 17 teaching gardens over the past decade between Lincoln and Minnehaha counties. The project at Sioux Falls Christian is the organization’s first garden build of 2020.

Landscape Garden Center donated the compost and SD Agriculture in the Classroom will provide starter plants for the students to start their garden. Volunteers from Minnehaha Master Gardeners assisted with the construction of the boxes.

“Everything we do is through collaboration and teamwork because there’s really no other way to do it,” said Larson.

Once the teaching garden has been established, Ground Works aims to expand the learning opportunities beyond plant science. Future classes could focus on food and nutrition or the agriculture industry at large.

Broady works to fill what he calls “the nature deficit.” For eight years at Ashe Charter, he worked as a garden teacher introducing students to the worlds outside their door. In July, he started as an agriculture and careers teacher at Living School, a high school in its second year that follows a “learning by doing” philosophy; students focus on multidisciplinary projects, and the goal is to graduate with both a college acceptance letter and a trade certification. But even in a slightly different role, Broady has the same mission as always: bringing health, healing, and connection to students, particularly children of color.

Broady’s own childhood, in Florissant, Missouri, had nature in droves. His father, a former science teacher, kept a huge garden. Broady took himself on adventures in the woods across the street. “It was a dream,” he said. “I was able to just explore in nature, and I knew that nature was my own.” He majored in biology and began teaching high school in New York City in 1999. That was the first and last time he held a traditional classroom job. From 2000 to 2009, he taught in community-education programs and alternative schools, designed curricula, worked as a chef, and made electronic music. Eventually, he settled in San Francisco.

Over that same period, programs that introduced public-school kids to gardening were putting down roots in New Orleans. In 1998, volunteers started an after-school gardening program at the city’s first charter school, New Orleans Charter Middle. NOCM’s organizers, now a charter-management group called FirstLine Schools, had just taken over Samuel J. Green Middle School in 2005 when Hurricane Katrina destroyed the NOCM campus and temporarily closed Green. In 2006, the famed Berkeley chef Alice Waters invited Green to become the first spot to replicate her original Edible Schoolyard, a public-school garden program that introduced children to sustainable agriculture and nutritious eating through hands-on activities. An edible schoolyard is different from a regular school garden because of its “seed to table” philosophy: Community members grow food, then cook and eat it, together.

When Broady heard about Edible Schoolyard NOLA in 2010, he got so excited that he applied for the only open job—a policy-administration position, not his forte. Then he had one conversation with the director, bought a Volvo, and drove from San Francisco sight unseen. Fortunately, Green had just lost a garden worker, so Broady got a job. And, as it turned out, he was instrumental in expanding the program; during his time, FirstLine took on four additional elementary-middle schools. He started teaching in the largest garden, at Ashe.

Today, Ashe has a cornucopia of annual Edible rituals. In October, they hold Sweet Potato Fest, with a parade and a community spud harvest. November is fifth-grade “Iron Chef.” For the annual report-card night, when parents come to the school to see their children’s progress, Broady displays objects like bird skulls found in the garden, and an array of student-concocted herbal tinctures, teas, and salves. Every September brings Watermelon