The Way I See It is a documentary about former Chief Official White House Photographer Pete Souza that makes its TV debut on MSNBC tonight, Friday, October 9, at 10 p.m. ET following The Rachel Maddow Show. You can also watch it on FuboTV, Sling or Hulu + Live (free trial).

Pete Souza was the Chief Official White House Photographer to both President Obama and President Reagan. One of Souza’s most iconic photos is of Obama bending over for a 5-year-old boy who asked him, “Is my haircut just like yours?” Obama let the young boy feel his hair, and Souza got a shot of this precious moment.

In the role of White House photographer, Souza had unprecedented access behind-the-scenes to both presidents’ administrations, documented in his books “Obama: An Intimate Portrait,” and “Shade: A Tale of Two Presidents,” in which he compares Obama to President Donald Trump. In The Way I See It, you’ll get access to see the Obama and Reagan administrations through the eyes of Souza.

What channel is MSNBC on?

You can find which channel MSNBC is on by using the channel finders here: Verizon Fios, AT&T U-verse, Comcast Xfinity, Spectrum/Charter, Optimum/Altice, DIRECTV and Dish.

Where can I watch The Way I See It if I don’t have cable?

You can live stream it on FuboTV (7-day free trial, then $59.99/month). FuboTV is a streaming service that offers access to your favorite TV shows, live sports events and much more. You can also watch it on Sling with their Blue package, or on Hulu + Live (free trial).

For years, Pete Souza, the former chief official White House photographer of President Barack Obama, stayed behind the camera. But in The Way I See It, a new documentary from filmmaker Dawn Porter, the lens is trained squarely on him. The film, in select theaters on Sept. 18 and premiering on MSNBC on Oct. 9, focuses on his work during the Obama administration as well as the years he spent photographing President Ronald Reagan. “What I was trying to do was look for these authentic moments,” Souza tells TIME about his tenure in both administrations. “The fleeting moments that not only reflect what’s happening in front of you, but that reveal what the president is like as a human being.”

In recent years, Souza has become more outspoken, particularly about his own feelings on President Trump, on his Instagram account, where he has more than 2 million followers. There, he shares photographs from his time in the White House, many of which are accompanied by snarky captions that compare the current president to the previous one. The popularity of his account led to the 2018 publication of his most recent book Shade: A Tale of Two Presidents. He goes even further in The Way I See It, revealing more of his personal life onscreen. “This puts me in a more public footing, which is a little uncomfortable for me,” Souza tells TIME. “But at the same time, I couldn’t not agree to do this film. I feel so strongly about the institution of the presidency and how it’s being ripped to shreds by this guy.”

Souza hopes that viewers of the film can draw connections between both Reagan and Obama through their appearance in photographs. “Whether you agree with their politics or policies, they’re decent human beings and they’re empathetic,” Souza says. “They know the presidency is about us and not about them.” Throughout the documentary, he discusses what it was like to have such unfettered access to Barack Obama and how he was able to showcase the former president’s humanity through pictures. In seeing authentic moments of a person exercising their capacity for empathy, we can understand what type of leader they are, Souza says.

Given the time he spent in the Obama White House, Souza also had a high level of access to the current Democratic presidential nominee Joe Biden, when he served as Vice President alongside Obama. TIME asked Souza to choose photographs he took of Biden during that time to discuss what he thinks voters can glean about Biden as a leader, and what a Biden presidency might look like.

Reaching out across the aisle 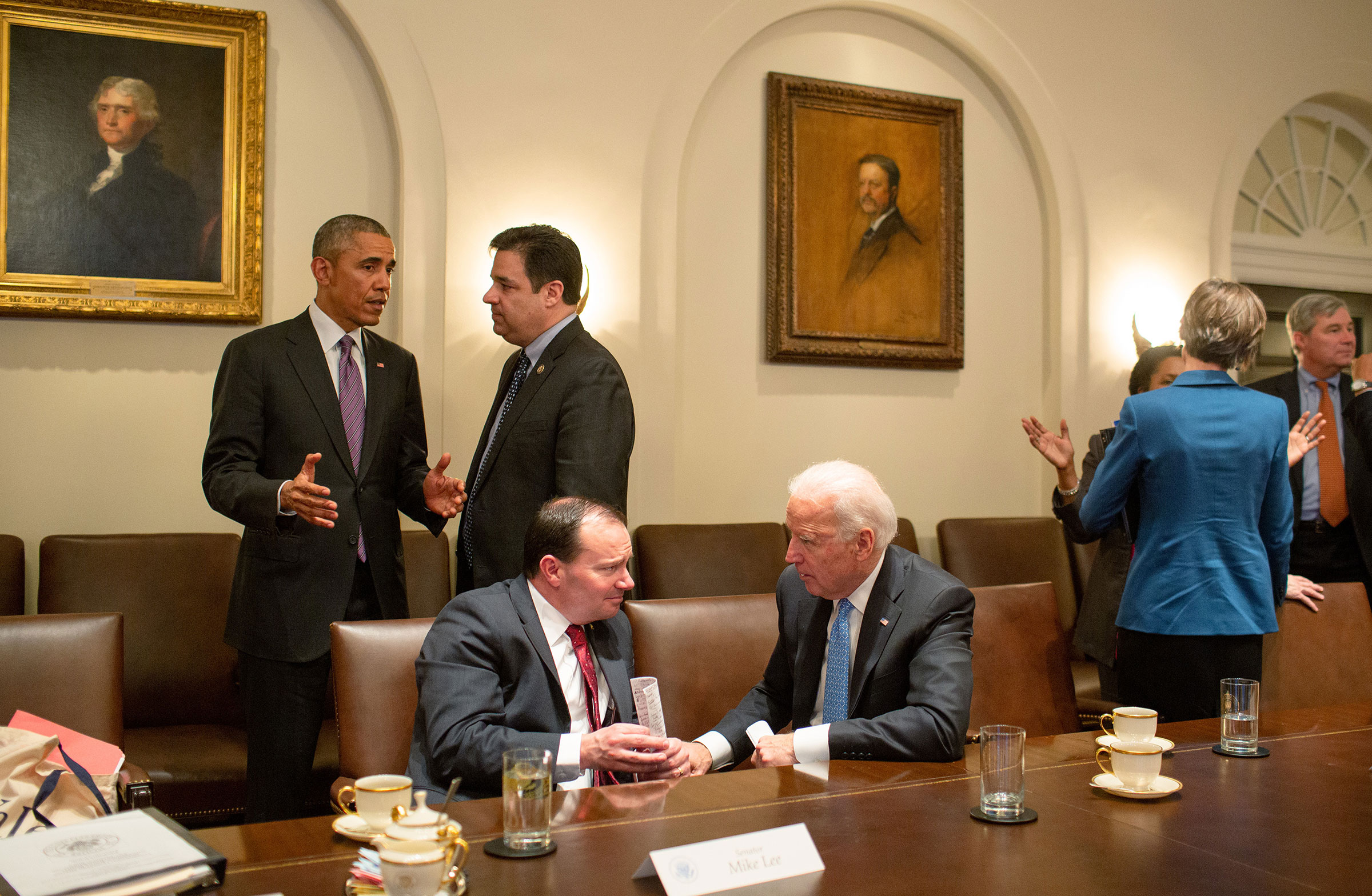 “This is Biden talking to a Republican

Pete Souza has had two stints as White House photographer: 5½ years working for Ronald Reagan, then eight for Barack Obama. Talk about camera-ready bipartisanship. It’s working for Obama that’s the main concern of “The Way I See It.” The documentary opens Friday at the Kendall Square and several suburban theaters. It will also be broadcast Oct. 9 on MSNBC, which produced the film.

Souza, 65, was born in New Bedford and discovered photography as an undergraduate at Boston University. He went to Kansas for a master’s degree, worked for a couple of small papers there, then was hired by the Chicago Sun-Times. This led to that first White House job. Souza makes plain that while he didn’t share Reagan’s politics he liked and respected him. Which makes all the more striking his disgust with Donald Trump (we’ll get to that, the documentary certainly does).

At Nancy Reagan’s request, Souza was asked to be official photographer at her husband’s funeral. That’s hard to top as a vote of confidence. He was working for the Chicago Tribune at the time. When Obama was elected to the Senate, Souza was assigned to document his first year in office. The two men hit it off. “I wasn’t with him every day,” Souza recalls, “but I got to know him pretty well professionally.” Four years later, the offer came to work for Obama. “We’re going to have some fun,” the president-elect told him.

Fun may not have been quite the right word. “Imagine trying to take a sip of water from a fire hose that never shuts off,” Souza says of the job. “If you really want to document the presidency for history, you have to be there all time.” It’s hard to imagine a more demanding job — there’s no Camp David for the White House photographer — but it’s also hard to imagine a more exhilarating one. That exhilaration very much comes through in the documentary. Looking at the various photographs and film clips, we are there. Imagine what it was like for Souza, being there all the time.

“The most interesting part of my job was seeing him in all these different compartments of his life,” Souza says of Obama. We see those compartments: chief executive, politician, husband, father, national consoler, even basketball player and coach. Also matchmaker. There are many good anecdotes in “The Way I See It,” but the best may be how Obama “badgered” Souza — that’s how the photographer puts it — into marrying his longtime girlfriend. The wedding was held in the Rose Garden, with Obama officiating. No, Souza didn’t take the wedding photos.