Interior Minister Aryeh Deri said Tuesday that someone was spreading an unfounded rumor among journalists that he had broken a virus lockdown by traveling from his Jerusalem home to be in the northern city of Tiberias for the recent Yom Kippur holiday.

Deri’s denial came as a fellow cabinet member, Environment Protection Minister Gila Gamliel, faced a possible police investigation for allegedly having tried to conceal from Health Ministry officials that she was in Tiberias on Yom Kippur, even though her home is in Tel Aviv. Gamliel was diagnosed with COVID-19 after the holiday, and reportedly gave misleading information during an epidemiological probe to trace the source of her infection.

Though Deri did not name anyone in his rebuttal, the former mayor of Tiberias, Ron Kobi, posted earlier in the day on Facebook that “another senior minister” had been in the city on Yom Kippur.

Kobi and Deri have a personal beef, as the minister was instrumental in seeing the mayor dismissed from his position at the beginning of the year after he failed to pass a city budget. 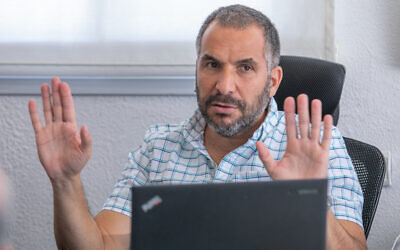 “A message to members of the media: There is a detestable liar going to reporters since yesterday and slandering that I prayed on Yom Kippur in a Tiberias synagogue,” Deri tweeted. “The liar already said that to four reporters in an attempt to frame me. On Yom Kippur I prayed in an open space next to my home in Jerusalem.

In a video message posted on the Knesset Channel’s Twitter feed, Deri said that his public relations adviser had called him in a panic after a reporter had asked about the minister’s whereabouts on Yom Kippur. In the video Deri likewise denied that he had been away from home.

Earlier, Kobi wrote on Facebook: “Another senior minister stayed in Tiberias on Yom Kippur!!! Believe me, they have no boundaries (literally: They have no God)!”

Kobi, who was dubbed the “Donald Trump of the north” by Israeli media over his combative style, swept into local office in the fall of 2018 on a campaign that focused on combating the growing ultra-Orthodox community and its influence in the city, highlighted in a series of frequently foulmouthed and menacing Facebook live videos.

However, he failed to form a coalition and with his party making up just six of the city council’s 15 spots, other members refused to get behind his budget proposals, even after he was given an extension until September 30, 2019.

After his ouster Deri appointed Interior Ministry deputy director Moni Ma’atok to chair a special committee that will run the city for the next three years until the next municipal elections. The council is made up of other civil servants from the ministry.