WASHINGTON (Reuters) – White House officials sought to project an air of business as usual on Friday despite President Donald Trump’s COVID-19 diagnosis, but aides privately expressed concern about the presidential election and showed signs of rising worry about the coronavirus.

“The business of government continues,” economic adviser Larry Kudlow told reporters after Trump disclosed on Twitter early in the day that he had tested positive for the coronavirus.

Trump flew by helicopter to Walter Reed Medical Center for treatment in the early evening. But staff members said he would continue working from a special suite there and that he had remained engaged in governing throughout the day. He did not transfer power to Vice President Mike Pence.

“We’re just trying to make sure that he takes it easy but he’s hard at work and will continue to,” White House press secretary Kayleigh McEnany said on Fox.

“His first question to me this morning was, ‘How is the economy doing, how are the stimulus talks going on Capitol Hill?,” Meadows told reporters outside the White House, adding he had spoken several times to Trump already.

Privately, some Trump advisers worried Trump’s illness could cost him the presidential election in just 31 days.

“Clearly it changes the dynamic from us being able to travel and show enormous energy and support from the rallies, which has been part of our calculation just like in 2016,” said one Trump adviser.

The president’s upcoming election events were postponed or moved online. Trump had been scheduled to hold a “Make America Great Again” rally in Florida on Friday night, two in Wisconsin on Saturday and another in Arizona on Monday.

On Friday, the sight of more White House staff than usual donning masks, including press secretary McEnany in the evening, was taken as a sign that coronavirus risks were being taken more seriously. Communications adviser Hope Hicks and first lady Melania Trump also tested positive.

Some in Washington speculated that Trump’s events on Saturday to announce Amy Coney Barrett’s nomination to the Supreme Court may have spread the virus.

Besides Trump and his wife, attendees Ronna McDaniel, the Republican National Committee chair, Mike Lee, a Republican senator, and the University of Notre Dame’s president, Rev. John Jenkins, have all tested positive for the coronavirus.

As Trump told the country that the coronavirus would “disappear,” White House officials and many Republican politicians have eschewed mask-wearing and other protocols health officials recommend to stop the

Logic leaves the room when Indian daily soaps try to dive into the unrealistic (read: science-fiction) world of entertainment. This doesn’t necessarily mean that all the content put out by Indian creators for TV is bad, it’s just sometimes the filmmakers and writers try too hard or just don’t care what the viewers think.

Over the years, Indian film industries have given us gems that defy all the laws of physics. Flying cars, villains levitating in the air until the hero punches them to the ground, slicing one bullet to kill two bad guys, jeeps flying in the air and colliding with helicopters– the list goes on.

But why should movies have all the fun?

During the coronavirus lockdown, Indian television kept us hooked with its over-the-top cringy sequences that helped us get through the unproductive, boring days.

Here are five times Indian daily soaps bamboozled us with scenes that could give Christopher Nolan run for his money.

A snippet from the Bangla show Krishnakoli, a romantic-drama series, which went massively viral on social media last month, panned to an intense hospital scene where the doctors are doing everything they can to save a dying man.

“I cannot say anything about him. We are trying our level best,” the doctor informed as he proceeded to use the defibrillator machine that sends an electric current through the chest of a patient to stop the trembling muscles of the heart, especially experienced during a cardiac arrest.

As heart-stopping (no pun intended) as the scene was, the doctor used a piece of strange equipment that caught the fancy of the Internet.

From the looks of it, the doc used a bathroom scrubber brush to revive the dying man. Well.

Ishq Mein Marjawan 2 aired on Colors TV upped the ante with a scene that can only be understood visually but we will try.

The scene featured protagonist Ridhima Vansh, played by Helly Shah, who is seen walking as she appears to be bothered by something. All of a sudden, she trips over an open suitcase and bangs her head against the wall. After taking the blow to their head, she falls into the same suitcase in the posture that has her fit inside it perfectly.

Things only get wilder when the suitcase magically zips itself and Ridhima seems to be trapped inside it.

A man is then seen carrying the closed suitcase and then flinging it into a swimming pool. Meanwhile, another man, Vansh Raisinghania played by Rrahul Sudhir, is looking for trapped Ridhima and slides by the poolside to see the bag sinking along with the drowning woman. Okay, then.

The romantic sequences in Indian daily soaps are endless. Episodes are dedicated to endless songs playing in the background as actors indulging in PDA on the small screen. But we are

located in seiranri – a commercial building complex in binjiang district, hangzhou, PIG design has completed the renovation of a 1,450 m2 area including public walkways and washrooms. mainly targeted at urban young generations, the project combines functionality and novel ideas, generating a space-like interior with apparent influence from concepts of gravity, planets, and black holes. 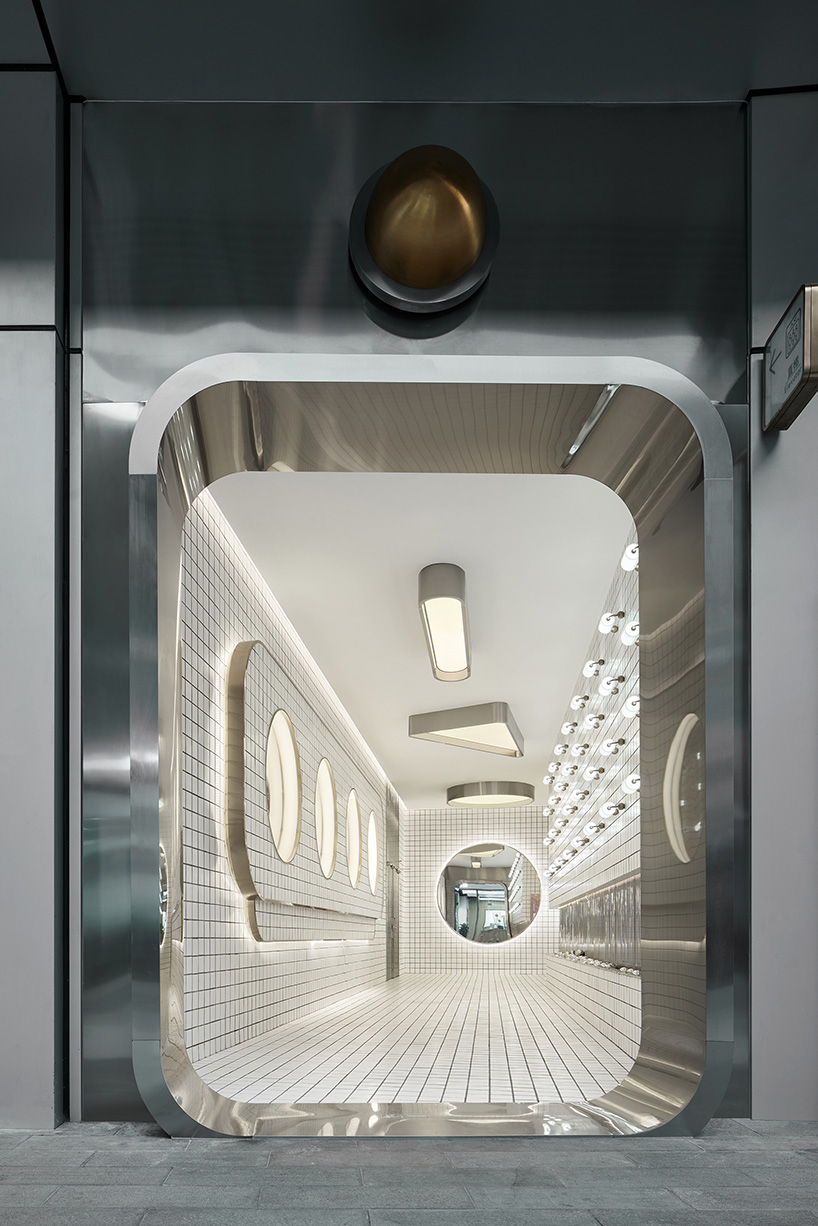 PIG design has extended the pre-existing 80 m2 restroom to create a large communal area. just like a black hole, the original washroom has engulfed and absorbed its surroundings, eventually forming a broad public space where people can stop and rest. this space contains elevator halls, escalator wells, passages for logistics personnel, as well as actual restrooms. the passageways for customers and those for tenants are separated, and all circulations are optimized. 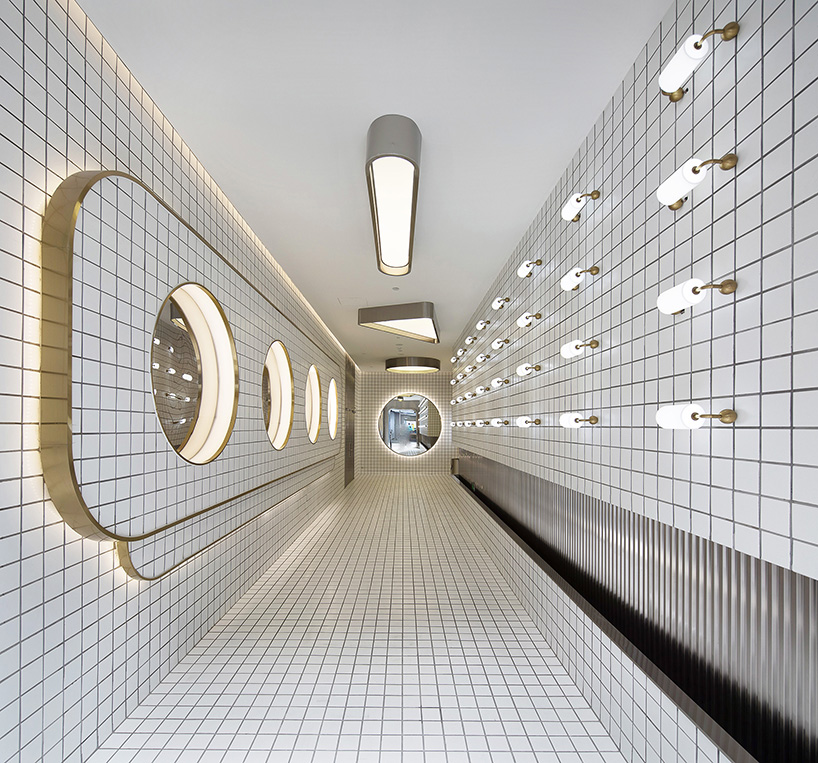 the project consists of three separate floors, and each of them features a different dominant hue. white, green, and purple are respectively the main colors of each level, thereby creating an overall scene that echoes the colorful view produced by friction between planets around a black hole. tiles, a common material that is cost-saving and easy for cleaning and maintenance, are applied to large areas of the space, to give the visual impression of fragments 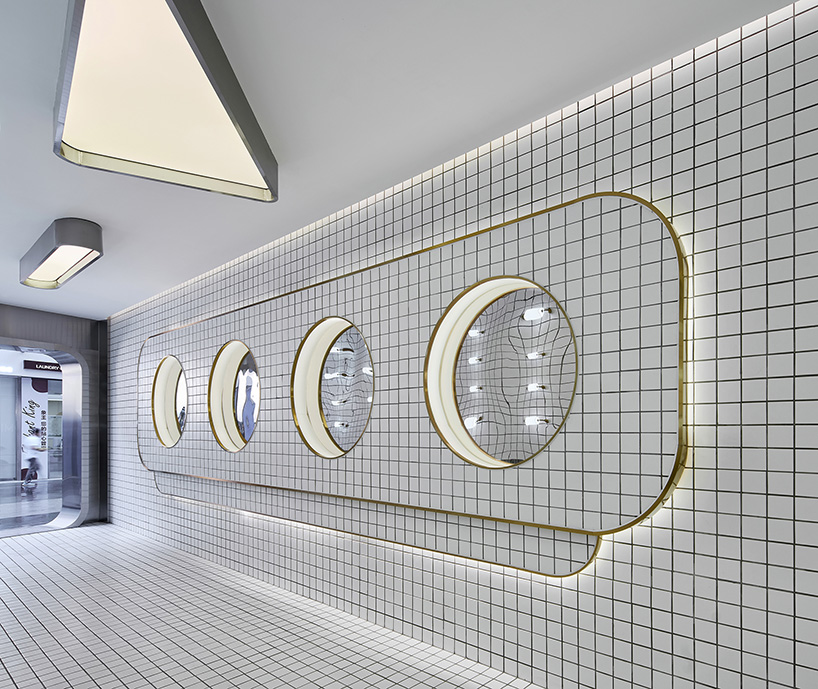 conventionally, a washrooms are private and not usually highlighted in spatial design. however, here, such a space is accentuated by a strong color on each floor, to produce dramatic visual and sensory experiences. public passages become extensions of the restroom areas, inviting people to go deeper into the interior. within these hallways, a series of items that generally exist in restrooms has been placed, such as washing sinks, showers, toilet paper, toilets, and mirrors. although not considered as elegant in an aesthetic sense, these objects perfectly function as conceptual and symbolic visual elements, evoking familiar memories of daily life. 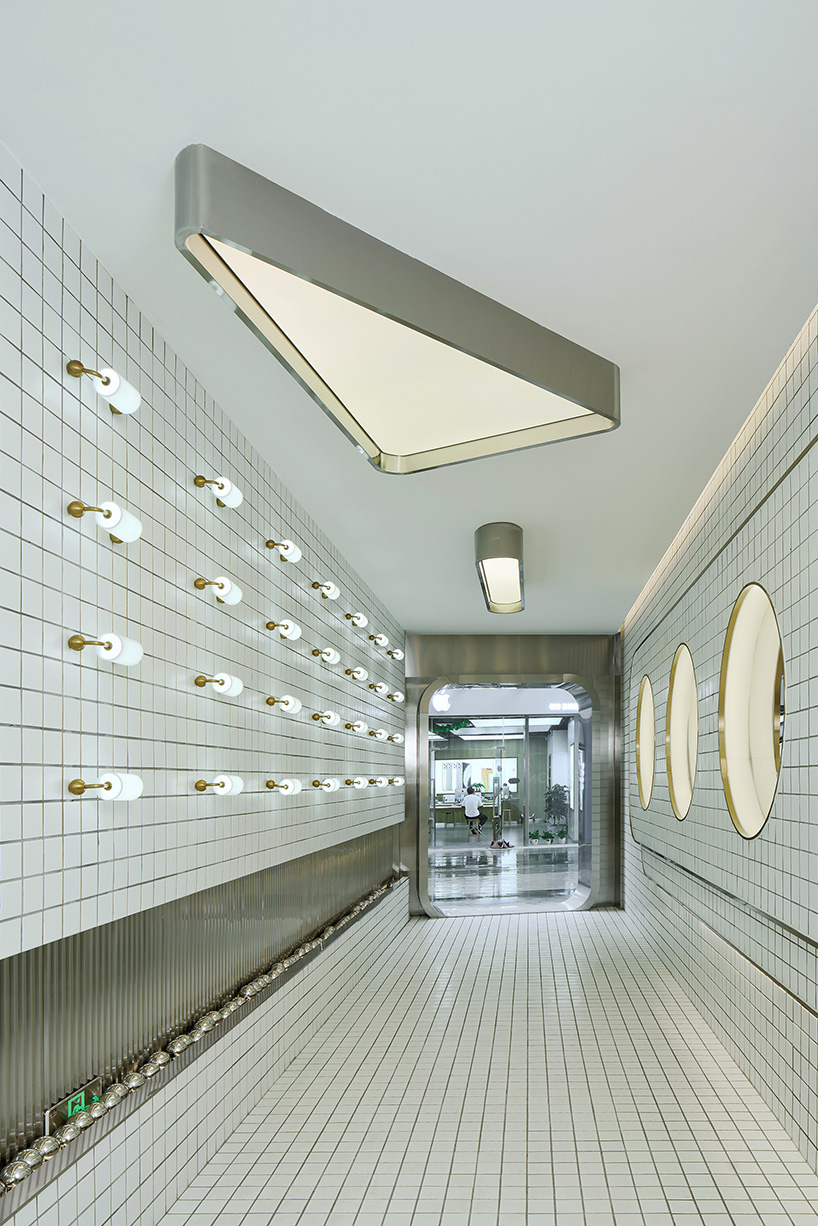 overall, the design seems to generate a story-telling spatial experience, emerging from familiar yet strange scenes. all elements within the interior are magnified, interlaced, and sorted, like planets colliding with each other due to the gravity of a black hole. the holistic use of a single color on each floor provides a unique background while people take the role of the protagonists. through a detailed visual language complete with fragmented shapes and sculptural volumes, the space encourages visitors to look past the virtual boundary, pay attention to daily life elements that are often ignored, and create their own story.