A statue of Caesar Rodney will be added to the still-to-be-built National Garden of American Heroes, President Donald Trump said Thursday during a speech at the National Archives in Washington.

The announcement came more than three months after the Rodney statue was removed from Wilmington’s Rodney Square.

That statue, however, will not be going to Washington. It is owned by the city.

“Today I am announcing a new name for inclusion,” Trump said. “One of the 56 signers of the Declaration of Independence was a patriot from Delaware… Caesar Rodney was called upon to break the tie even though he was suffering from very advanced cancer. He was deathly ill. Rodney rode 80 miles through the night, through a severe  thunderstorm from Dover to Philadelphia to cast his vote for independence.”

© WILLIAM BRETZGER, DELAWARE NEWS JOURNAL
The statue of Caesar Rodney is hoisted from its pedestal on Rodney Square in Wilmington early Friday evening.


Rodney was likely not deathly ill during that trip, though he did suffer from a facial cancer. He died in 1784, eight years after the signing of the Declaration of Independence.

“For nearly a century a statue of one of Delaware’s most beloved citizens stood in Rodney Square, right in the heart of Wilmington,” Trump said. “But this past June, Caesar Rodney’s statue was ordered removed by the mayor and local politicians as part of a radical purge of America’s founding generation.”

President @realDonaldTrump tells the story of Caesar Rodney, a patriot whose statue was destroyed and removed pic.twitter.com/8YFYOIRzZy

The Rodney statue was removed on June 12 during a time when activists targeted historical statues of Confederate figures and American colonists for what they say are celebrations of slavery and racism. Statues came down either by protesters’ hands or government officials’ agreement.

Mayor Mike Purzycki said in June that the Rodney statue in Wilmington was “removed and stored so there can be an overdue discussion about the public display of historical figures and events.”

In a statement provided to Delaware Online/The News Journal Thursday, Purzycki said: “The City did not remove the Caesar Rodney statue to discredit it, but to protect it. It is not damaged, but is in safekeeping. We will have a community discussion about public statues in our City in the near future and at some point, we will reach a consensus. It is unimaginable, with the challenges facing our country today, that the President of the United States is worried about how we choose to tell our story and preserve our history.”

Trump established the statue garden in a July 3 executive order. The garden is not expected to open until 2026 and is intended to be “a vast outdoor park that will feature the statues of the greatest Americans to ever live,” Trump said

Acting Homeland Security Secretary Chad Wolf did not show up to testify in front of a House committee Thursday, defying a subpoena lawmakers issued last week compelling him to appear.

President Donald Trump in late August announced his intention to nominate Wolf, who has served as the acting DHS secretary for 10 months, to the permanent secretary position, and formally did so on Sept. 10. DHS last week told the House Homeland Security Committee that Wolf would be unavailable to testify as previously scheduled because it would be “contrary to standard practice” for a nominee to testify while his nomination was pending. Thompson then issued a subpoena for Wolf to appear Thursday.

Wolf was supposed to appear alongside FBI Director Christopher Wray, who did testify before the committee.

DHS, which called the subpoena “brazenly partisan,” says officials offered to instead send the department’s No. 2, Ken Cuccinelli, to testify at the hearing.

Thompson criticized Wolf’s decision not to appear Thursday during his opening statement at the hearing, noting that there is no legal prohibition barring Wolf from testifying.

“Mr. Wolf has run the Department of Homeland Security for the last 10 months and has been responsible for numerous decisions directly relevant to the subjects the Committee intends to explore,” Thompson said. “Regrettably, he has chosen to defy the subpoena. That he would refuse to come before the committee after committing to do so should appall every member of this committee. Insisting Mr. Wolf keeps his commitment to testifying before Congress isn’t playing politics – it’s doing our job.”

Thompson also noted that Wolf has made numerous media appearances since his nomination to the permanent secretary position, “including no fewer than four appearances on Fox News.”

During the hearing, Cuccinelli and the committee got into a spat on Twitter about the matter.

The brouhaha comes amid increased scrutiny of Wolf’s position and actions. Last week, an explosive whistleblower report alleged that Wolf and Cuccinelli pressured analysts to alter reports on Russian election interference, downplay the threat of violent white supremacists and make other changes to intelligence reports.

In August, the agency that serves as Congress’ independent investigative watchdog concluded that both Wolf and Cuccinelli were ineligible for their current positions – a finding DHS has dismissed as incorrect.

LAKE CHARLES, La. (KPLC) – As many Lake Charles residents are still without power, the need for food and water is becoming crucial.


Everyday, more than two thousand people line up at the Lake Charles Civic Center, where organizations are providing essentials to those who need it most.

“When we came home it was like we couldn’t even recognize basically where we lived. You couldn’t tell it was Westlake. I’ve been there 53 years and I’ve never seen anything like that,” explained Robert Williamson.

“The first couple of weeks, I was like well I have food from my freezer that I was able to save so I was cooking and stuff but then I realized everything takes so much longer to do. Just your normal day to day things and plus you add in all the clean up and things we have to deal with,” said Christi Crane.

“We’ve been here at the Civic Center for just over a week with the National Guard and we have cars rolling through here all day,” said World Central Kitchen Relief Operations Lead Lucy Shupak. “The National Guard is giving out water, ice and tarps and then folks come to us and they pick up trays of food to take home. Since Power is still out in Lake Charles, it’s been just busy all day.”

“If it weren’t for them, I’d tell you it’d be really, really, really hard. If it wasn’t for the national guard doing what they’re doing. We come and we get ice, tarps every once in a while. The MRE’s, I can’t say enough about them, we got no place to cook unless we barbecue somewhere and barbecuing out in this heat is just killer,” Williamson stated.

“For us that’s what a hot plate of food is. Anything is good, we’ve had people coming up saying were just eating canned food in our car and just a hot, chef prepared, delicious, healthy meal goes so long for them,” said Shupak.

Both the National Guard and World Central Kitchen will be at the Civic Center everyday until 6 p.m.

Trump announced she was spearheading the Rose Garden overhaul in late July. The renovation included updates to plants, trees, grass and florals, as well as the addition of a new limestone border, pathways and technological elements to make the outdoor space more modernized for televised events.

The first lady’s renovation followed the guidelines from the garden’s original 1962 layout — but the update was largely panned by critics for looking substantially altered. Most discussed was the removal of 10 crabapple trees. The trees, which over the years had been replaced and were not the Kennedy-era originals, were transported to a National Park Service facility for care. According to a White House official, they will be replanted elsewhere on the grounds in the near future.

The trees were causing too much shade to provide for healthy and regular growth of the florals and shrubs beneath them, according to a 220-page report on the garden history and renovation prepared for the Committee for the Preservation of the White House.

Get local news delivered to your inbox!

Over the 25 years it’s been running, the Daily Mail’s National Garden Competition has shown how many wonderful gardens there are in Britain.

For many of us, it’s our gardens that have kept us going this year, so it’s not surprising that the standard for 2020 was so high that the judges, led by renowned garden designer Tim Sharples, had a hard job whittling the 2,000 or so entries down to just four finalists.

‘It amazes us that we still flush out such fantastic gardens after all these years,’ says judge Hamish Webb. ‘The final four are all so different, yet perfectly reflect their creators. One thing we heard again and again was that gardens had saved these folk during the lockdown.’

Our winner will receive £2,000 and the legendary winner’s blue plaque. Read about the four finalists here, and decide which would be your choice.

The judges’ verdict will be announced at the end of September in Weekend.

A TASTE OF JAPAN IN SOUTH YORKSHIRE

Terry Wallace, 84, and his wife Rita, 80, both worked in supermarkets before retiring. They live in Sheffield.

‘We’ve lived here for 52 years. The house was a year or two old when we bought it, and the garden was just lawn front and back,’ says Terry. 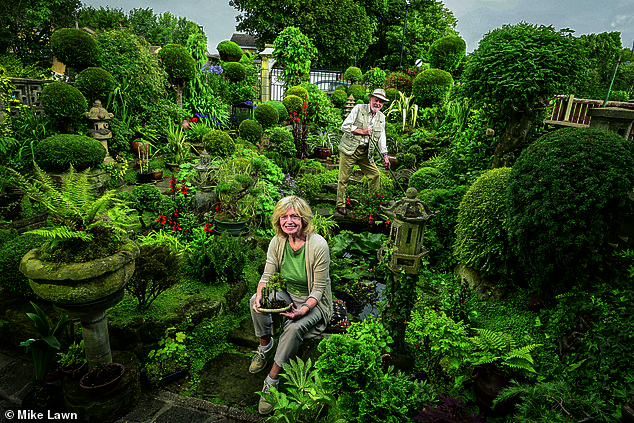 Terry Wallace, 84, and his wife Rita, 80, both worked in supermarkets before retiring. They live in Sheffield

‘We were so impatient to get started. The front garden and the back garden are quite different. We call the front garden, which is about 21ft by 30ft, our Spanish Garden.

‘It has a 16ft tall palm, and colourful plants like fuchsias, lobelias, agapanthus and pelargoniums.

‘There’s a small trough with a pool and some of my collection of bonsai. It’s popular with the neighbours – we get lots of nice comments as people walk by. 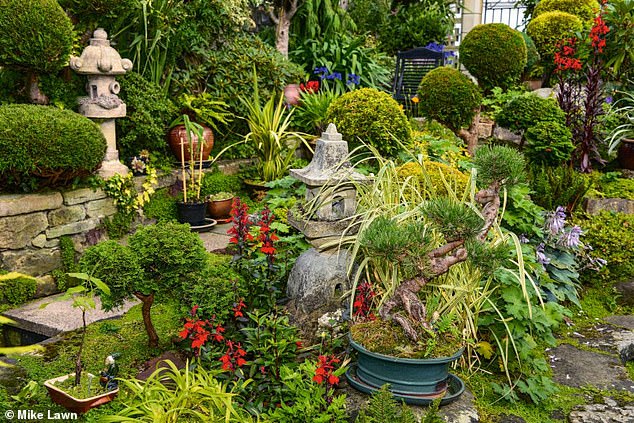 ‘The back garden is slightly bigger and has a different feel. It’s largely inspired by my love of Japanese art and my admiration for Japanese gardens.

‘I’ve never been to Japan, although I feel a connection with it.

‘There are a lot of Japanese-style ornaments and figures, little pagodas and statues, which I made myself from concrete, and rocks and stone which I’ve brought into the garden, carrying them all myself.

What the judges said

‘A truly individual and life-long project, marrying an eclectic range of gardening influences to create a very personal and beautiful oasis.’

‘One of my passions is for bonsai. My oldest is 45 years old and I have about 16 of them.