John LewisThe Hill’s Campaign Report: Biden goes on offense Congress must bolster voting rights and invest in the protection of our election system Ginsburg to lie in state in Capitol on Friday MORE (D-Ga.) in the position.

The Democratic members of the Ways and Means Committee chose Pascrell to be chair of the subcommittee, which is tasked with conducting oversight on tax, trade and health issues.

Pascrell said in a statement that it is “an enormous honor and responsibility” to follow Lewis in the position. He also said that as subcommittee chair he plans to focus on investigating the Trump administration.

“Exposing the public and private corruption left in the wake of the Trump government will take all the labor of cleaning up after the circus leaves town,” Pascrell said. “I’m eager to grab a shovel and get to work.”

Richard Edmund NealRep. Cedric Richmond set to join House Ways and Means Committee Coons beats back progressive Senate primary challenger in Delaware Pelosi: House will stay in session until agreement is reached on coronavirus relief MORE (D-Mass.) said that he has “full confidence that Rep. Pascrell will work tirelessly to ensure the Trump Administration is implementing the laws under Ways and Means’ jurisdiction efficiently and according to congressional intent.”

Pascrell was first elected to Congress in 1996 and is a longtime member of the Ways and Means Committee. He has been one of the leaders of Democrats’ efforts to obtain President Trump

The Trump administration has named three cities that are slated to lose federal funding after the White House accused them of tolerating crime.

New York City, Portland and Seattle are on the list of “anarchist cities” that Trump officials say have failed to stem crime linked to a summer of protests.

It follows a memo from Mr Trump earlier this month, threatening the move.

The mayors of the cities have promised to sue, calling Mr Trump’s move a political stunt.

A statement from the Justice Department on Monday laid out recent crime rates in the cities and how their police responded.

“We cannot allow federal tax dollars to be wasted when the safety of the citizenry hangs in the balance,” Attorney General William Barr said in the statement.

He also called on Portland, Seattle and New York City to “reverse course and become serious about performing the basic function of government and start protecting their own citizens”.

All three cities have seen major protests since the death of unarmed black man George Floyd in May.

It remains unclear what federal funding may be cut from the cities.

In a joint statement, the mayors of Portland, Seattle, New York and Washington DC – which was on a shortlist of “anarchist cities” but was not included in Monday’s decision – accused Mr Trump of “playing cheap political games with congressionally directed funds”.

The mayors called the decision “thoroughly political and unconstitutional” and accused the Trump White House of “shirking responsibility and placing blame elsewhere to cover its failure”.

Violent crimes have generally declined in US cities since the 1990s, but have risen steeply in the past year in several cities including Philadelphia, Chicago and New York.

What is happening in those cities?

The move comes amid a summer of unrest sparked by protests against the police killing of black Americans. Some of the protests have led to major police reforms around the country.

In New York City, the rate of shootings and murders have skyrocketed as youth programmes and other social organisations have been placed on hold due to the pandemic. Cases of looting and vandalism have also made national news as protests for racial justice have sometimes turned violent.

Reacting to the Justice department announcement on Monday, New York City mayor Bill de Blasio called the decision “another one of President Trump’s games,” adding: “It’s insulting to the people of New York City and his [Mr Trump’s] effort to withhold our funding is unconstitutional.”

Seattle permitted the establishment of a so-called “autonomous zone,” where protesters forbade police from entering six square blocks of the downtown part of the city for nearly a month. The

Rep. Linda Upmeyer, R-Clear Lake, speaks to the Iowa House of Representatives as she resigns her passion as the Speaker of the House on the first day of the 2020 legislative session on Monday, Jan. 13, 2020, at the Iowa Capitol in Des Moines.  (Photo: Kelsey Kremer/The Register)

Former Iowa House Speaker Linda Upmeyer announced Thursday she had been appointed to serve on the advisory committee for the Export-Import Bank of the United States, the U.S. agency that finances the export of American goods and services.

Upmeyer, who stepped down from her top legislative role ahead of the 2020 session and announced she would not seek re-election to her seat in November, was among the 17 members appointed to the committee this week. Her term will run through September of next year.

“I was chosen to represent agriculture, which as we all know, is vital to Iowa, our economy, and our future,” she said in a news release. “My hope is to increase opportunities for agricultural exports, and especially Iowa, to other countries so we can continue to feed and fuel the world.”

Upmeyer, 68, was first elected to the Iowa House in 2002. The Clear Lake Republican was the first woman in Iowa history to be elected House speaker in 2015 and served in the role for four years.

More: Democrats’ aim: End Republicans’ hold on Iowa Legislature. What are their best chances? Where will GOP counter?

In September 2019, she announced she would resign from her role to spend more time with her family and would not run again when her term ended in 2020.

The Export-Import Bank of the United States Advisory Committee meets four times per year and advises the agency on its programs and the level of financing it provides to support exports. The committee includes representatives of the environment, production, commerce, finance, agriculture, labor, services, state government and textile industry sectors.

Ian Richardson covers the Iowa Statehouse for the Des Moines Register. Reach him at [email protected], at 515-284-8254, or on Twitter at @DMRIanR.

Elle Decor has a new top dog. On Wednesday, Hearst announced that Asad Syrkett is the new editor in chief of the three-decade-old shelter title, succeeding Whitney Robinson, who departed the brand in April after nearly three years at the helm. Syrkett, who begins his role on September 14, will report into Stellene Volandes, editorial director of the brand, in addition to her position as editor in chief of Town & Country.

Syrkett most recently led the New York operations and East Coast business development for Hem, a Swedish furniture brand, and previously held editorial positions at a number of architecture and design publications. As deputy editor at Curbed, he directed much of the site’s reporting on design and cities, and oversaw franchises such as the House Calls home tours series and the site’s Travel vertical. He also cohosted the publication’s podcast, The Curbed Appeal, for two seasons. Prior to joining Curbed, he was an editor at Architectural Digest and Architectural Record.

Buy now for unlimited access and all of the benefits that only members get to experience.

“I’ve spent my career seeking out and obsessing over the best design at any scale,” Syrkett said in a video posted on Instagram. “Furniture, objects, homes, buildings, cities… I truly believe in the power of design to bring us joy, to challenge the way that we see the world and ourselves, and to think more critically about the way we live. In this year of pandemic and protests against racial injustice, the incredible importance of a safe and beautiful sanctuary has been made so viscerally clear to so many of us, especially as it remains inaccessible to so many others. I’m looking forward to continuing that conversation in the pages of the magazine and online. I’m also incredibly excited to work alongside Stellene Volandes and the team, and to bring you stories that I hope will challenge, surprise, and inspire you.”

“[Syrkett] brings a singular combination of respect and reverence for all that Elle Decor is, with an exciting vision of all that it will and can be,” Volandes said in a statement. “Every element from the photography, to the feature writing, digital programs, social media, and client events will work together to celebrate great design and its impact on every aspect of our world.”

Elle Decor currently produces nine issues a year, with a circulation of 525,502, according to its 2020 media kit. It receives an estimated 2.2 million unique monthly visitors to its website, ElleDecor.com.

Inside Australia’s best DIY project of 2020: Couple transform their children’s nursery into a luxury hotel-style bathroom complete with a double shower and marble-top vanity

When Aleasha and Ben Mawhinnew started renovating the spare room of their New South Wales home in early 2020, they had no idea it would soon be named one of Australia’s best DIY projects of the year.

After their six-year-old son Nate outgrew his nursery, the couple from Shellharbour, south of Wollongong on the NSW South Coast, decided to convert the space into a luxurious ensuite.

The result is a hotel-style bathroom – complete with a double shower, monochromatic tiles and a marble-top vanity – fitted with bargain buys from Kmart, Target and Bunnings that cost just $3,700 for everything from toilet to tapware.

Bunnings has featured the Mawhinnews handiwork in its roundup of ‘Australia’s best DIY projects of 2020’, which recognises the country’s greatest home transformations ‘from simple makeovers to full-on renovations’. 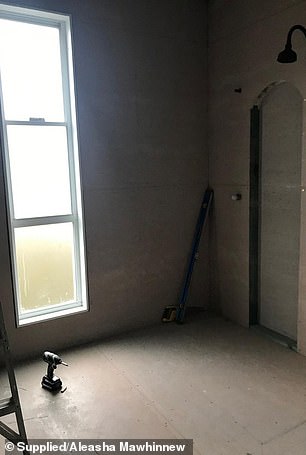 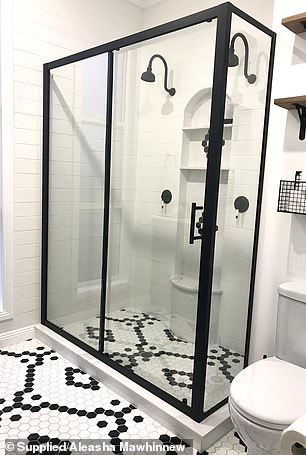 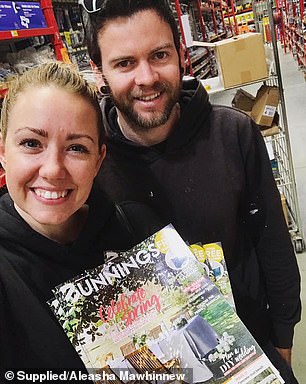 ‘It’s everything we dreamed it would be, it says ‘us’ all over!’ Ms Mawhinnew, a 31-year-old childcare teacher, told Daily Mail Australia.

She said the project took roughly six months to complete, with most of the work being done on weekends as the couple held down full-time jobs while chasing two lively children around.

‘Two kids, work and life in general made it to tricky to complete,’ Ms Mawhinnew said.

Some of the heavy lifting was done with help from friend Jimmy, a plumber, and Ben’s ‘handyman’ father Mark, but Ms Mawhinnew said her 32-year-old cabinet maker husband deserves credit for ‘nearly all’ of the renovation.

Linen and soft furnishings – $200 from Spotlight

Bathroom accessories and toiletries – $50 from Woolworths 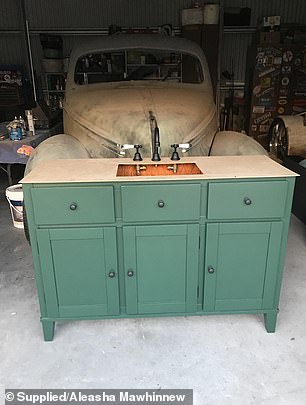 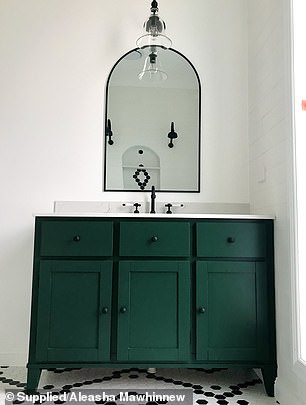 Budget savvy Ms Mawhinnew spotted a secondhand vanity (left) for sale on Facebook marketplace, and revamped it with a coat of forest green paint (right) 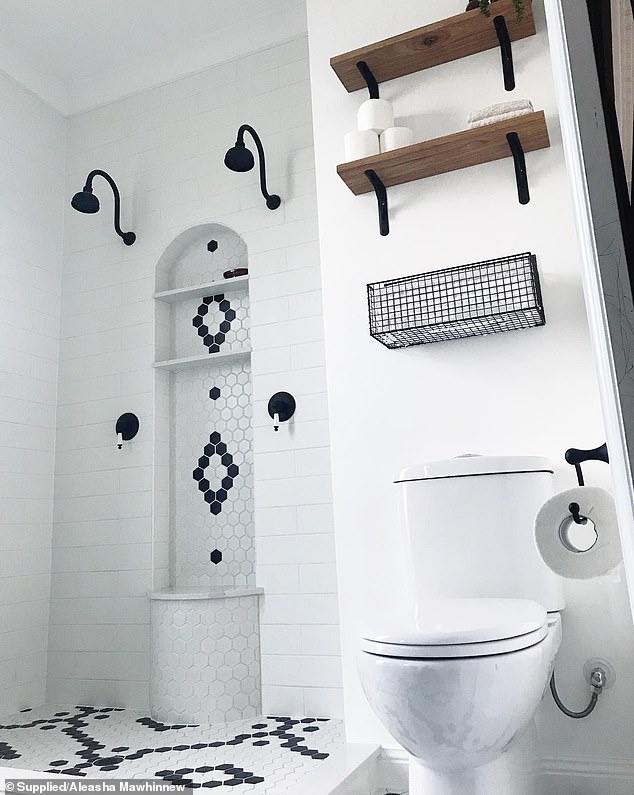 The couple bought their toilet, tapware and hexagon tiles from Bunnings

‘Ben has literally made my vision