Cultura Beer Garden, the Laredo Film Society and Able City Architecture teamed up to capitalize on new opportunities with restrictions due to the COVID-19 pandemic such as the curfew loosened. They hosted a drive-in movie night Saturday to offer some nightlife and boost a business hit hard by the pandemic.

“We have worked with Cultura for years on different events and figured this event would be a great opportunity to bring our patrons some films and assist a business that has been impacted by the pandemic,” Laredo Film Society board director Karen Gaytan said.

While bars and other nightlife such as Cultura Beer Garden have been some of the business most impacted by the pandemic, Gaytan said organizations like the Laredo Film Society have also dealt with limitations.

“Laredo Film Society is one the many organizations whose programming has been affected by the pandemic,” Gaytan said. “Our in-person events and fundraisers are unable to take place. We have transitioned to having more virtual events, which has helped us maintain an audience and a public to serve, but we have been limited in the ways to carry out our events.”

Although virtual events have helped the organization remain connected and generate funding, it pales in comparison to the outreach they normally receive. Nevertheless, they understand the severity of the situation.

The event took additional precautions aside from just the spacing out of vehicles and seating. Patrons were asked to stay in their vehicles, and waiters wore masks at all times while providing curbside service. Cultura Beer Garden also provided hand washing stations. The Laredo Film Society hopes that with the precautions taken this can be the first of many events.

“We have a series of events for the month of October,” Gaytan said. “We encourage people to check the Laredo Film Society website and social media for more details.”

There’s a reason those who read the book have been excited for the movie adaptation of “Words on Bathroom Walls.”

This coming-of-age story is unique and thought provoking — an honest, touching depiction of a teenager dealing with mental illness that is a delightful and poignant addition to the “movies about high school” unlike the rest.

Directed by Thor Freudenthal (“Diary of a Wimpy Kid”), the movie is based on a popular young adult novel of the same name written by Julia Walton. The screenplay was written by Nick Naveda. 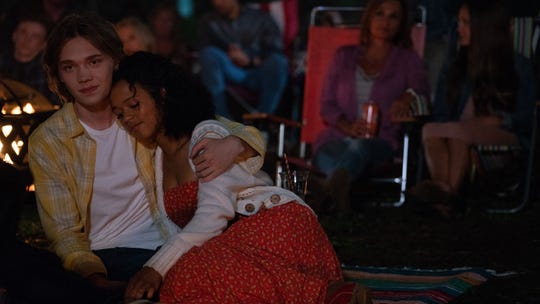 Charlie Plummer plays Adam, a funny, wry, food-loving high school senior with aspirations of attending culinary school until a wrench is thrown in his plans. A hallucination-related incident leads to both a schizophrenia diagnosis and his expulsion from school. The only school that will take him in partway through the academic year? A Catholic school.

At this school, he meets Maya (Taylor Russell), who is the brilliant, forthright valedictorian with a rebellious streak. She becomes Adam’s tutor, friend and love interest as he navigates the world outside while dealing with the vivid, noisy world inside his head, which is projected to the viewer (and to him when he is not on medication) in the form of three characters that represent different parts of his personality.

What’s key is the honest and hopeful representation

Adam serves as a narrator throughout and viewers frequently serve as the role of the psychiatrist when Adam speaks directly to camera in a “therapy” setting. Breaking the fourth wall serves the movie well. It gives Adam the opportunity to share his inner thoughts and motivations throughout the story — something that can get lost when a book is translated into a movie.

Plummer and Russell have great chemistry, and unlike many movies and shows about high school students, they actually look 18. Every role is well-cast, including Andy Garcia as Father Patrick, who serves as a mentor to Adam when they meet in the confessional at the Catholic school. Garcia is such a strong presence in his scenes; it would have been nice to see him more.

The book has been celebrated by readers as an honest depiction of dealing with a mental illness like schizophrenia, which is typically represented solely in a negative light in popular media.

Refreshingly, “Words on Bathroom Walls” shows not just his trials and tribulations of dealing with a serious disease, but also the joy Adam experiences when chasing his dreams like a typical teen. Plummer’s genuine, heartfelt performance will likely go a long way in humanizing a diagnosis that is often unfairly stigmatized.