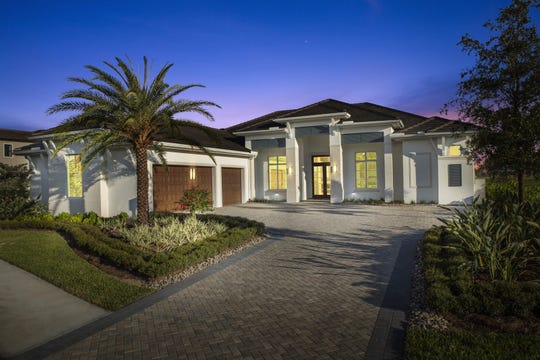 Priced at $2,350,000 furnished, the completed Monaco model’s 3,299 square feet under air open-concept floor plan features a spacious great room with beamed ceiling details and a wet bar.  The great room opens to a covered lanai and an outdoor living area with an outdoor kitchen, pool bath, and a custom pool and spa.  The lanai and outdoor living area overlook Esplanade Lake Club’s lake views.  Outdoor Productions designed the model’s landscaping, outdoor living area, pool and spa.  The master suite features a bedroom with a sitting area that opens to the outdoors, walk-in closets, and a morning bar.  The master bath includes dual vanities, a free-standing tub, and a walk-in shower.  Two VIP guest suites feature private baths.  The Monaco plan also features an owner’s study, a dining room that opens to the outdoors, an island kitchen with counter-height seating and a walk-in pantry, an audio/visual control center, and a three-car garage.

The designers selected a color palette that features wall tones in various shades of white accented by soft tans and warm greys.  The palette plays against ten-inch wide plank white oak hardwood flooring.  Intriguing ceiling details are found throughout the home, including reverse soffit details with cove lighting in the great room and study.  The master bedroom features a beamed ceiling detail.  The great room’s wine bar showcases a base cabinet with a satin matte black finish, a quartzite counter surface, pendant lighting, and floating shelves against a decorative wallpaper.

Have you ever seen an authentic Japanese garden? Well, I had the chance of seeing the one in Monaco and was really impressed too. Wanna taste a little Japanese culture? Stepping on this ground is escaping from the real world into a fantasy land. You suddenly find yourself in a typical Japanese natural setting like the ones you see in marvelous paintings. The only thing that's missing is the fog. Instead, the Mediterranean sun reveals all minute details in a warm light.

With Japanese gardens, what you see is not all; the surface of things is the mere reflection of the psyche of an ancient culture. One really needs to be literally "cultured" in this direction to best appreciate the value of this art. (which I myself was not at the time of my visit! And it was a pity as I did not know what to look for and what to analyze better!) One can speak of a philosophy of gardening coming from the ancient Japan. Japanese gardening is an art fetched beyond the arrangements of vegetation, water and stone but is full of symbols:

* Koko – the veneration of timeless age;

* Shizen – the avoidance of the artificial;

* Yugen, or darkness – imply the mysterious or subtle;

* Miegakure – the avoidance of full expression

The perception of nature is different in the Japanese culture from that of the European one. Instead of viewing nature only as something to be subjugated and transformed according to man-made ideal of beauty, Japanese developed a close connection to nature, considering it sacred, an ally in putting food on the table and an ideal of beauty in itself. That is why the Japanese gardens are the synthesis of nature in miniature instead of correction of nature as with European gardens.

Actually, the design of Japanese gardens come from the Chinese model. The history goes back in time, around year 100BC when the emperor of China, Wu Di of the Han Dynasty established a garden that contained three small islands, mimicking the Isles of the Immortals, who were the main Taoist deities. An envoy of Japan saw it and took the idea to Japan, improving the existing Japanese practices.

The Japanese Garden of Monaco was designed at the request of Prince Rainier who thus fulfilled a desire Princess Grace had expressed during her life-time. The garden was designed by the landscape-architect Yasuo Beppu, has 7,000 square meters, its construction took 3 years and it was inaugurated in 1994.

* The wall (Heï) with an intermediary bamboo fencing (Takégaki) that stands for fragility and simplicity.

* The stone lanterns (Tôrô) – each having special different characteristics;

* The islands (Shima) – represent two long-living animals – the tortoise and the crane, symbols of complementarity expressed

* The Tea house (Chatshitsu) – named the Garden of …