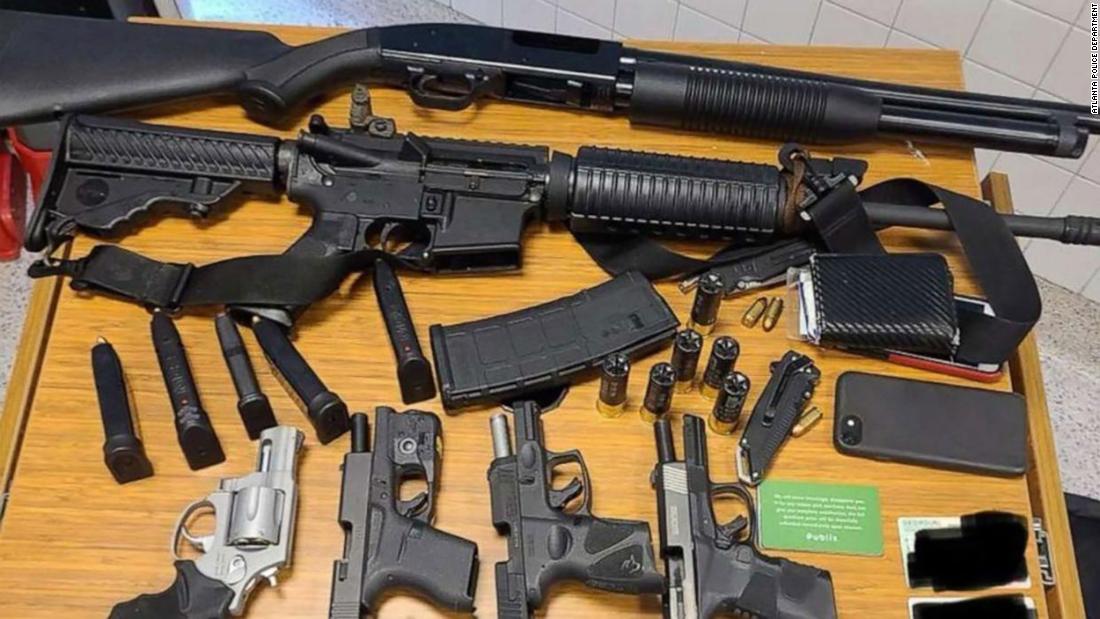 The witness rushed out of the bathroom and notified staff at the Publix Supermarket. When police arrived soon after, they arrested a suspect as he was exiting the bathroom — with six loaded guns in his possession.

The suspect, identified as 22-year-old Rico Marley, now faces a slew of charges related to the incident, which came just days after 10 people were killed in a mass shooting at a supermarket in Boulder, Colorado.

It was that tragedy that was fresh in the mind of the Instacart shopper, Charles Russell, he told CNN affiliate WSB.

“I saw an AR-15,” he said. “And I was like, you know, this kind of startled me just again with events that recently happened in the grocery store up in Colorado.”

Authorities have not said what they believed Marley intended to do with the weapons.

According to the police incident report, Russell was entering the men’s restroom when he “heard clicking sounds from the bathroom stall.”

“It sounded to him like someone was loading firearms,” an Atlanta officer wrote. “He also told me that he saw an AR-15 style rifle leaned against the wall.”

By the time the officer arrived at Atlantic Station — a commercial and residential complex in Atlanta just north of downtown — the supermarket appeared to have been evacuated, the report says.

The officer wrote that he donned a ballistic helmet and took his city-issued rifle into the store, where he immediately saw the suspect coming around the corner from the restroom, just feet away. The officer ordered the suspect to put his hands up and not move, the incident report says.

“The accused appeared to be surprised when he saw us that close to him,” the officer wrote. Marley was detained without incident, the report says.

After arresting Marley, police recovered six firearms: a DPMS AR-15-style rifle, a 12-gauge Maverick Arms Modell 88 shotgun, three semi-automatic 9 mm pistols and a .38-caliber revolver. All of the weapons were loaded and the rifle, shotgun and three 9 mm pistols all had a round in the chamber, according to the police report.

The suspect, who was wearing body armor when he was arrested, had the four handguns in his clothing while the rifle and shotgun were being carried inside a bag, the report says.

Marley, who’s being represented by a Fulton County public defender, waived his first court appearance Thursday, where Judge Rashida Oliver ordered him to be held without bond due to the “danger risk to the community at large.” He’s being held in the Fulton County Jail.

The Fulton County Public Defender’s Office did not respond to CNN’s request for comment Thursday.

In a statement, a spokesperson for Publix said the company was cooperating with investigators and that “the safety of our associates and our

The FBI arrested a Black Lives Matter activist for allegedly using over $200,000 in donations on personal expenses.

“In sum, Page has spent over $200,000 on personal items generated from donations received through BLMGA Facebook page with no identifiable purchase or expenditure for social or racial justice,” FBI agent Matthew Desorbo said.

Sir Maejor Page, 32, was arrested Friday in Toledo, Ohio, and is facing federal wire fraud and money laundering charges for allegedly spending the money on tailored suits, a home in Ohio, and guns.

“Numerous videos and livestream videos were posted to Page’s personal social media pages showing himself in what appeared to be newly purchased clothing, hotel rooms and office space in Atlanta,” the FBI said in its release. “Several audio statements are made by Page in the videos boasting about the money he has, his tailored suits, his nice cufflinks and ‘$150 dollar ties.’”

He was charged with one count of wire fraud and two counts of money laundering. He was released on bond after appearing before a judge via video.