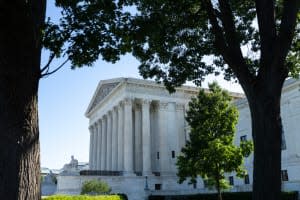 The Supreme Court is passing on a key case involving a transgender student, and the ACLU is celebrating the news as an “incredible victory.”

The Supreme Court on Monday declined to hear the case of Gavin Grimm, the transgender student who challenged a Virginia school board’s policy that restrooms are “limited to the corresponding biological genders,” NBC News reports. Lower courts sided with Grimm that this violated Title IX, the civil rights law against sex discrimination, and since the Supreme Court isn’t taking up the case, Grimm’s win stays in place.

Josh Block, an attorney for the American Civil Liberties Union, told NBC that this was “an incredible victory for Gavin and for transgender students around the country,” while Grimm said, “I am glad that my years-long fight to have my school see me for who I am is over. Being forced to use the nurse’s room, a private bathroom, and the girl’s room was humiliating for me, and having to go to out-of-the-way bathrooms severely interfered with my education.”

According to CNN, Justices Clarence Thomas and Samuel Alito both said they would have taken up the case.

END_OF_DOCUMENT_TOKEN_TO_BE_REPLACED 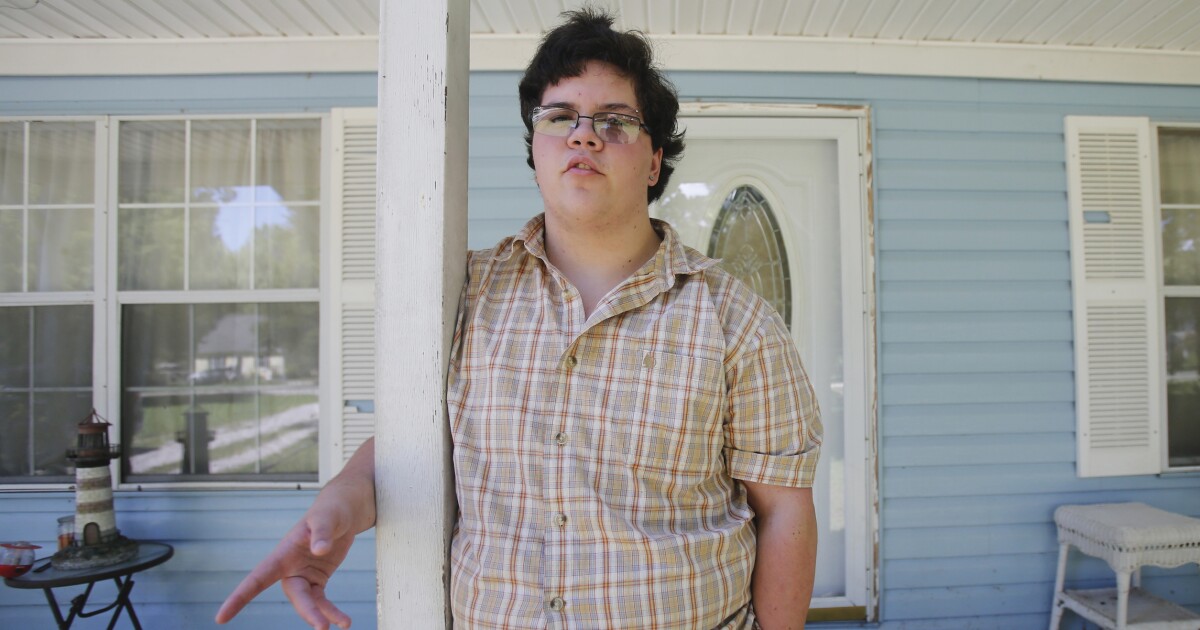 The Supreme Court declined to hear a challenge on Monday to a Virginia appeals court decision allowing students to use school bathrooms according to their gender identity rather than biological sex.

The challenge was a response to a case originally brought forward by Gavin Grimm, a Virginia teenager born a female but identifying as a male who said that the Gloucester County, Virginia, school system was discriminatory in its bathroom policies. Grimm won that case last year. The Supreme Court shut down the challenge in an unsigned order, but Justices Samuel Alito and Clarence Thomas added that they would have heard it.

The court’s decision means that Grimm’s victory will remain intact.

Grimm’s case was one of several legal battles involving transgender bathroom use that played out at about the same time that the Supreme Court was weighing whether or not to legalize gay marriage. In this one, the school was initially lenient but soon changed its policy, claiming that bathroom use was “limited to the corresponding biological genders.”

When lawyers for the school appealed to the Supreme Court last year, Grimm’s attorneys at the American Civil Liberties Union responded by urging the court not to take the case, arguing that it was a Title IX violation to deny any student the bathroom use of his or her choice.

CLICK HERE TO READ MORE FROM THE WASHINGTON EXAMINER

Judge Henry Floyd, who wrote the majority opinion in Grimm’s case, said that the logic of Bostock could easily be applied to bathroom disputes. Although Bostock “expressly” excluded a discussion of how bathroom cases should be decided, the landmark Supreme Court case, Floyd said, could easily be used to interpret Title IX, which prevents sexual discrimination in schools.

Chris Christie greets others after President Donald J. Trump spoke with Judge Amy Coney Barrett during a ceremony to announce Barrett as his nominee to the Supreme Court in the Rose Garden at the White House on Saturday, Sept 26, 2020 in Washington, DC.


Eight people who attended a Rose Garden ceremony less than two weeks ago have tested positive for COVID-19, including US President Donald Trump, but the White House has chosen not to conduct contact tracing, The New York Times reported on Monday.

The US Centres for Disease Control recommends that contact tracing be conducted for “close contacts,” defined as anyone who has spent at least 15 minutes within six feet of “laboratory-confirmed or probable COVID-19 patients.” Close contacts are informed of potential exposure and instructed to self-quarantine, a process that “slows the spread of COVID-19,” according to the CDC.

Deere asserted that the White House “has established a robust contact tracing program,” but refused to say whether it has carried out contact tracing, specifically, for the Rose Garden event, per CDC guidelines.

“You have my answer,” he said in an email.

According to The Times’ reporting, based on another White House official’s statements, the answer is that no such work is being carried out for the Sept. 26 event, held to announce Trump’s nomination of Amy Coney Barrett to the Supreme Court.

Instead, the White House is limiting itself to conducting tracing only for contacts “within a two-day window from diagnosis,” The Times reported, which appears to consist “mostly of emails notifying people of potential exposure.”

The CDC states that the coronavirus can incubate for two days to two weeks before a person shows symptoms or tests positive. On average, it takes four to five days.

Have a news tip? Email this reporter: [email protected]

Kayleigh McEnany, the White House press secretary, repeatedly refused to denounce white supremacy on Thursday, insisting that President Trump had already done so and angrily accusing the media of refusing to accept his answer.

In a series of remarkably heated exchanges with reporters, even by the standards of the Trump White House, Ms. McEnany said that Mr. Trump has “always denounced any form of that” and read from past quotes from the president in which he condemned bigotry and racism, including “the K.K.K., neo-Nazis, white supremacists and other hate groups.”

But she would not explicitly condemn white supremacy from the briefing room lectern or specifically denounce the Proud Boys, a far-right group that Mr. Trump said should “stand back and stand by” during Tuesday’s presidential debate with Joseph R. Biden Jr.

When Ms. McEnany was asked why the Proud Boys, an extremist organization that embraces violence and hate against minorities, was celebrating Mr. Trump’s debate comments, she once again declined to denounce the group and noted that the president on Wednesday had clarified that the group should “stand back” and let law enforcement do their jobs.

Under repeated questioning by reporters from CBS, Fox News, CNN and other organizations, Ms. McEnany lashed out, blaming journalism organizations for publicizing the Proud Boys in their stories. She told a CNN reporter that “truth is of no moment” to the cable network and complained when a CBS News reporter interrupted her.

“It’s quite funny that the media goes haywire about interrupting and debates and then chooses to pursue that very same tactic themselves,” Ms. McEnany said. “This is a White House briefing: You ask a question and you give me time to answer.”

The president has — as Ms. McEnany said — at times denounced the K.K.K. and other hate groups. But he has often done so under pressure, and only as part of a broad condemnation against violence in which he quickly attacks left-wing groups as the bigger threat to the country.

In the debate, Mr. Biden said that antifa, a left-wing movement that has perpetrated violence, was “an idea,” different from specific right-wing hate groups, citing recent testimony by Christopher A. Wray, the director of the F.B.I., who described antifa as an “ideology or movement” rather than an organization.

“Ideas do not target police officers. Ideas do not burn down buildings. Ideas do not kill innocent Americans. Organizations do,” she said. “And Democrats should condemn that shameful group in the same manner President Trump continues to condemn white supremacy.”

In the face of broad criticism — including from key GOP senators — President Donald Trump on Wednesday addressed his failure to condemn white supremacist groups at Tuesday’s debate.

Leaving the White House for campaign appearances in Minnesota, Trump told reporters he doesn’t know who the “Proud Boys” are — despite having told the far-right group, which reportedly has described itself as “western chauvinist” but not white supremacist, to “stand back and stand by” at the debate.

“I don’t know who the Proud Boys are. I mean, you’ll you have to give me a definition because I really don’t know who they are. I can only say they have to stand down, let law enforcement do their work,” Trump said of the group which has staged counter protests in cities like Portland that have experienced recent violence.

Asked directly on Wednesday if he would denounce white supremacy, Trump claimed he has always denounced it — but once again didn’t use the words “white supremacy.”

A White House spokesperson had said earlier in the day there was nothing for the president to “clarify.”

At Tuesday’s debate, asked by moderator Chris Wallace of Fox News whether he was “willing to condemn white supremacists and militia groups and to say that they need to stand down and not add to the violence,” the president at first said, “Sure, I’m willing to do that.”

When Wallace pressed him, the president asked, “What do you want to call them?”

“Proud Boys, stand back and stand by,” Trump then replied. “But I’ll tell you what, somebody has got to do something about antifa and the left because this is not a right-wing problem. This is a left-wing problem.”

The group reportedly has previously denied links to white supremacy or violence.

The Proud Boys describe themselves as “a pro-Western fraternal organization for men,” according to the New York Times, and have denied they are part of the “alt-right” — but members have recently been connected to white supremacist groups.

The primary organizer of the Unite The Right rally in Charlottesville, Virginia — where one counter-protester was

“I wonder if you can just clean up or clarify something the president said yesterday,” ABC News’s Jonathan Karl asked White House press secretary Kayleigh McEnany the following afternoon. “If he loses this election, can you assure us that there will be a peaceful transfer of power?”

It’s worth noting Karl’s slip-up there: He’s done this long enough to know that one of the roles press secretaries generally play is to “clean up” politically problematic remarks for the president. Which is to say, he expected that McEnany would want to spin the comments, reframe them in a way that didn’t suggest that Trump was embracing a refusal to accede in the event of a loss.

“You are referring to the question asked by the Playboy reporter, right?” McEnany replied. When Karl reiterated his question, McEnany again referred to the questioner’s publication, pointedly, emphasizing the word “Playboy.” She then said that the original question reflected the reporter’s “deranged wish” that Trump would leave the White House.

This isn’t a cleanup effort obviously. Instead, it’s an effort to disparage the question to which Trump was responding, by shaming the men’s magazine for which the reporter worked. Trump’s view of Playboy is not as hostile as McEnany’s response of course, given that he’s appeared on its cover, participated in one of its adult-themed videos and warmly embraced its employees.

“It’s a very direct and very simple question,” Karl continued. “If the president loses this election, will this White House, will this president assure us that there will be a peaceful transfer of power?”

“The president will accept the results of a free and fair election,” McEnany finally replied. She went on to disparage Democrats as being the ones unlikely to accept the election’s results.

“Are the results legitimate only if the president wins?” NBC News’s Peter Alexander asked.

This might seem like a successful clean-up of Trump’s remarks. There you go: He’ll accept the election results. Easy-peasy. But it’s impossible not to understand why McEnany emphasized “free and fair” so pointedly, particularly given where the briefing went next.

“Yesterday when the president said, ‘Get rid of the ballots, there won’t be a transfer, frankly. There will be a continuation,’ which particular ballots is he talking about wanting to get rid of and why does he think that would help him get elected?” a reporter asked.

“The president wants to get rid of mass mail-out voting,” McEnany replied. “And that’s not because it — he’s said clearly that that could go either way, it could damage either candidate’s chances because it’s a system that’s subject to fraud.”

She went on to outline evidence which she suggested supported that idea: ballots found