A convicted sex offender was beaten and detained by a group fathers in the parking lot of a Cracker Barrel in South Carolina after an alleged incident Sunday in the restaurant’s bathroom, WSPA 7 News reported.

The Duncan Police Department confirmed the man involved in Sunday’s incident is 53-year-old Douglas Lane of Charlotte, North Carolina. He is charged with multiple charges, including voyeurism.

According to the report, a 15-year-old said she noticed something moving at her feet and realized it was a man’s head coming from the stall beside her.

After exiting the restroom she went to tell her father who then got a female employee to get the man out of the restroom.

Upon his exit, the father confronted Lane at the entrance to the bathroom area of the restaurant.

According to a witness, the man tried to get away, sprinting out the front door. The local police chief told WSPA 7 News that other fathers who knew what had happened tackled Lane in the parking lot and restrained him until the police arrived, WSPA 7 News reports.

Several fathers subdued a registered sex offender outside a Cracker Barrel restaurant in North Carolina on Sunday after the man allegedly peeked under a teenage girl’s bathroom stall.

The incident happened at a Cracker Barrel in Charlotte, N.C., on Sunday morning, according to Duncan police Chief Carl Long.

A 15-year-old girl allegedly saw the suspect peek his head under her bathroom stall and reported it to her parents, police said. Staff found the man in the bathroom and kicked him out, they said.

The girl and her parents were at the restaurant with several other families ahead of a girls’ softball tournament, according to reports.

The victim’s father and a few other dads chased the man out of the restaurant and prevented him from leaving until police arrived.

“Get him, he’s getting away!” they shouted, according to a witness who spoke to local station WYFF 4.

“The guy came running, sprinting out the front door with a very bloody nose,” another witness told local station WSPA.

Video obtained by WSPA shows the suspect bloodied and sitting on the ground while surrounded by parents.

A profanity-filled video posted on TikTok shows one man scolding the suspect, who can be seen sitting on the grass surrounded by angry adults. There is blood on his face and shirt.

“I didn’t do nothing!” the suspect can be heard saying.

“Imma tell you, if that was my daughter, you wouldn’t walk away,” the man tells him.

Douglas Lane, 53, was arrested on voyeurism and drug charges, according to Spartanburg jail records.

A mugshot shows Lane with a large bandage around his head and blood on his face after the encounter.

Lane is a registered sex offender with four past voyeurism convictions dating as far back as 1996, records show.

A judge set a cash surety bond at $2,000 and ordered Lane to wear a GPS monitor. Lane was also ordered to move to South Carolina and avoid all contact with the victim and her family.

Lane’s lawyer claimed during the hearing that the suspect didn’t know he was in the women’s bathroom.

His next court appearance is scheduled for Nov. 12.

—With files from The Associated Press

A 53-year-old registered sex offender who has been charged for voyeuristic acts at least eight times in the past was roughed up after being confronted by the father of a 15-year-old girl. Douglas Lane is accused of hiding out in a bathroom stall at a Cracker Barrel restaurant in Duncan, South Carolina in order to ogle unsuspecting girls.

Duncan Police Chief Carl Long said that the 15-year-old girl sensed something move at her feet and then spotted Lane looking at her from underneath the bathroom stall walls on Sunday.

According to WSPA, the girl immediately told her dad what happened and the two of them asked a woman who worked at Cracker Barrel to get Lane out of the bathroom. Other girls were reportedly in the bathroom at the time as well.

Police say that the girl’s father then confronted Lane, who is from Charlotte, North Carolina. An unnamed witness said Lane “came running, sprinting out the front door with a very bloody nose.” Lane’s troubles did not stop there, video recorded in the aftermath of the confrontation(s) show:

WYFF reported the several parents who were in the area for a girls softball tournament restrained Lane until police got the scene. A witness said he saw a “lot of good guys” take down Lane as he tried to run away.

Lane was charged for possession of marijuana, drug paraphernalia, and voyeurism. During a bond hearing on Monday, Lane claimed that he’d made an innocent mistake—namely, that he didn’t immediately realize that he was in the women’s bathroom.

The judge ordered Lane, a North Carolina resident, to stay in South Carolina under home detention and be subject to GPS monitoring. Lane is scheduled to appear in court on Nov. 12. It’s not immediately clear if he has an attorney of record.

The man accused is a registered sex offender, according to records.

DUNCAN, S.C. — A North Carolina man has been arrested after he was caught looking under a woman’s bathroom stall at a South Carolina Cracker Barrel, police told multiple news outlets.

According to WYFF, Duncan Police Chief Carl Long said a 15-year-old saw Douglas Lane, 53, looking underneath the bathroom stall in the women’s bathroom of a Duncan area Cracker Barrel. She told police she noticed something moving at her feet and realized it was a man’s head coming from the stall beside hers, according to WSPA.

The girl then left the bathroom and reportedly told her father about it. Witnesses told WSPA the 15-year-old wasn’t the only girl in the bathroom.

Citing Chief Long, news outlets report Lane tried to get away, but the girl’s father and other fathers who knew about the alleged incident helped tackle him and kept him restrained until police arrived.

A witness submitted video from outside the Cracker Barrel to WYFF, which reportedly shows Lane on the ground with blood on his face and shirt.

Group of parents stop man accused of looking under bathroom stall at Duncan Cracker Barrel, chief says. The man turned out to be a registered sex offender, according to the chief.https://t.co/1LTBpX7Asj pic.twitter.com/z73z1WmUkn

According to records, Lane, who lives in Charlotte, NC, is a registered sex offender in North Carolina.

News outlets report that during his bond hearing Monday, a judge ordered Lane to be monitored by GPS and move to South Carolina. He cannot have any contact with the 15-year-old girl or her family, WSPA reports.

RELATED: Police: Ex-boyfriend charged with murder after he ‘brutally gunned down’ mother of three 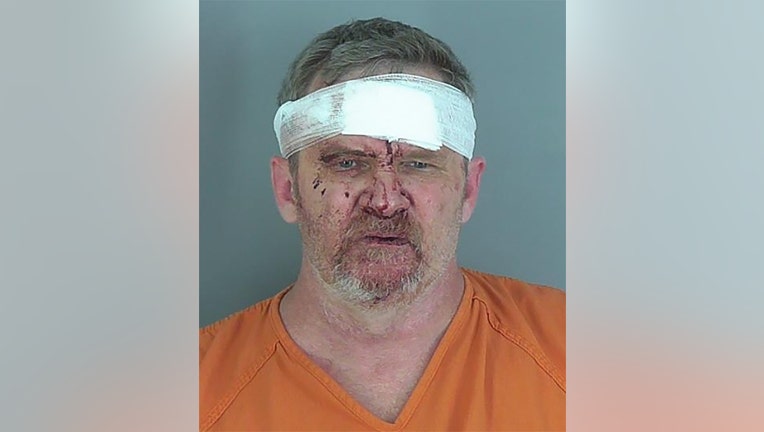 Duncan Police Chief Carl Long told WSPA that a 15-year-old girl in town for a softball tournament was in the bathroom at the Cracker Barrel on the 1500 block of East Main Street when she noticed something was moving near her feet. When she looked down, Long said she saw that a man’s head from the stall next to her.

Witnesses told WSPA that during the incident the 15-year-old victim was not the only girl in the bathroom at the time.

“I’ll never forget the way they looked after,” the witness said. “They were traumatized.”

The girl told her father, who confronted the man, identified as 53-year-old Douglas Lane, of Charlotte, NC, after an employee got him out of the bathroom. When Lane tried to leave the restaurant, the police chief said a group of fathers tackled him and kept him restrained until officers got to the scene.

A witness inside the restaurant told WYFF that he saw a man with a bloody nose run outside before being tackled in the parking lot.

According to government records, Lane has been a registered sex offender in North Carolina since 2004, when he was convicted of secretly peeking into an occupied room in Mecklenburg County. In that case, the record shows his victims were 8 and 9 years old.

Four years later in the same county, Lane was convicted of secretly peeking into an occupied room with his victim being 18 or older.

South Carolina’s sex offender registry finds that Lane was convicted of peeping, voyeurism or aggravated voyeurism in 1997 and failure to register in 1999.