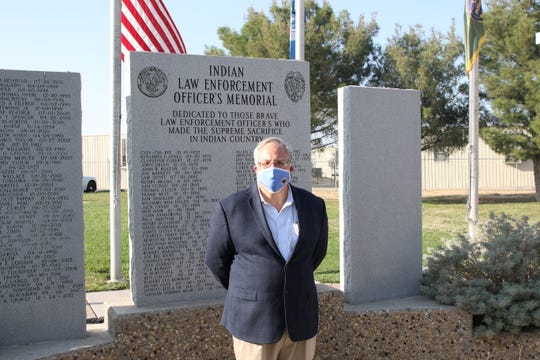 “My first impression is that we have extremely qualified staff and we have extremely dedicated employees who are trying to train folks to go back into the communities and provide the law enforcement that the people need,” he said.

Bernhardt said the Academy is prepared to welcome and train a new class of cadets to serve as law enforcement officers for the various Native American tribes and pueblos across the United States.

“It’s the equivalent of a police academy,” he said.

Cadets are trained in all of police work, according to Bernhardt.

Established as the U.S. Indian Police Training and Research Center, the Academy opened in Roswell on the site of the former Walker Air Force base on December 17, 1968. The Academy began training law enforcement officers from throughout the United States who serve tribal communities, the FLETC website indicated.

In 1973, the Academy was relocated to the Inter-mountain Inter-tribal School campus in Brigham City, Utah, as an operation of the BIA Central Office, Division of Law Enforcement Services. In October 1984, the Academy opened in Marana, Arizona under auspices of the Federal Law Enforcement Training Center where it continued basic police training. During this period the Indian Law Enforcement Officers Memorial was built, the website read.

In January 1993, the Academy relocated to FLETC in Artesia. The Indian Law Enforcement Officer Memorial was also relocated to Artesia, per the website.

Bernhardt’s stop in Artesia was part of an overall visit to the State of New Mexico regarding the Great American Outdoors Act signed into law Aug. 9 by President Donald Trump.

Bernhardt said the trip will also mean site inspections of other facilities like FLETC.