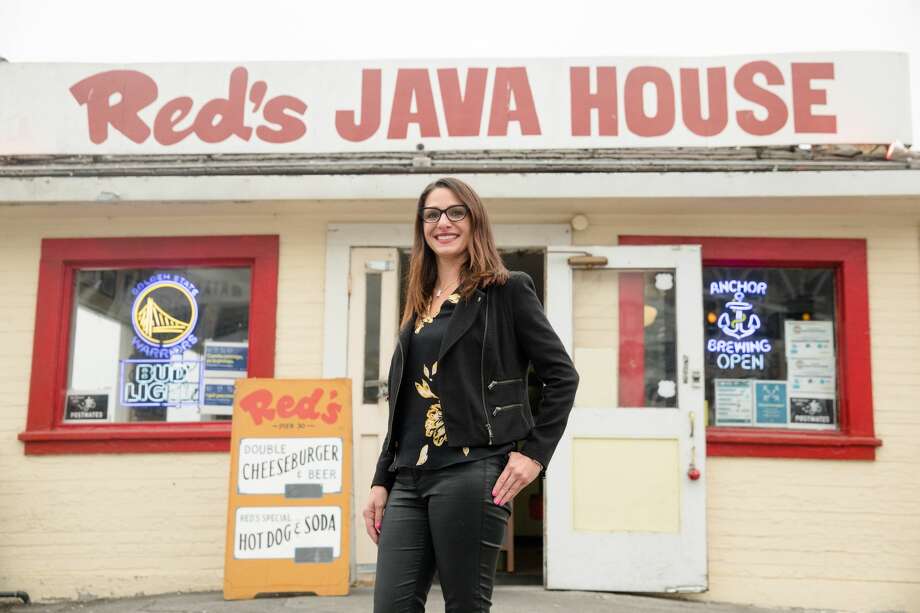 “I did not.” She laughs. “Within the first month I realized I wouldn’t be changing Red’s. I got so much slack from our regulars.”

Pisoni describes some of the protests long time Red’s customers made to change.

“The mop bucket was always under the TV, not in the mop closet. And so I moved it into the closet, and they were like ‘Where’s the mop bucket?…Where is it?! That bucket has been there for fifteen years and that’s where it belongs!'”

The mop bucket was just the start.

“I repainted the interior in the exact same color, but they told me I was making the place too clean. There was also an old coffee roaster in here that hadn’t been used in years. I removed it … They did not like that. So I didn’t change the patio, or anything. The tables inside are the original tables, the stools are the original stools.”

I ask if the staunch defense of the old ways was a little scary.

“No. I think it’s love,” she says. “Their parents brought them here, you know. And they’re bringing their kids here.”

Like the original brothers, Pisoni is a San Francisco native. We talk about the old city, and how the mile of land between the Chronicle building on 5th and Mission and Red’s has changed over the years. From our spot out back, with jazz drifting over the patio, the imposing Salesforce Tower and glassy skyline of Downtown looks down on the humble hut.

“We have construction workers, bikers, financial district people … All walks of life come to Red’s, and they all feel like they belong.”

One thing that Pisoni did add to the decor was more photos, and the cluttered interior walls of Red’s tell the tale of one of the most storied restaurants in San Francisco.

In 1955 brothers Tom and Mike McGarvey purchased Franco’s Lunch that had been serving food to longshoremen and sailors since 1929 on Pier 30, and renamed it Red’s. 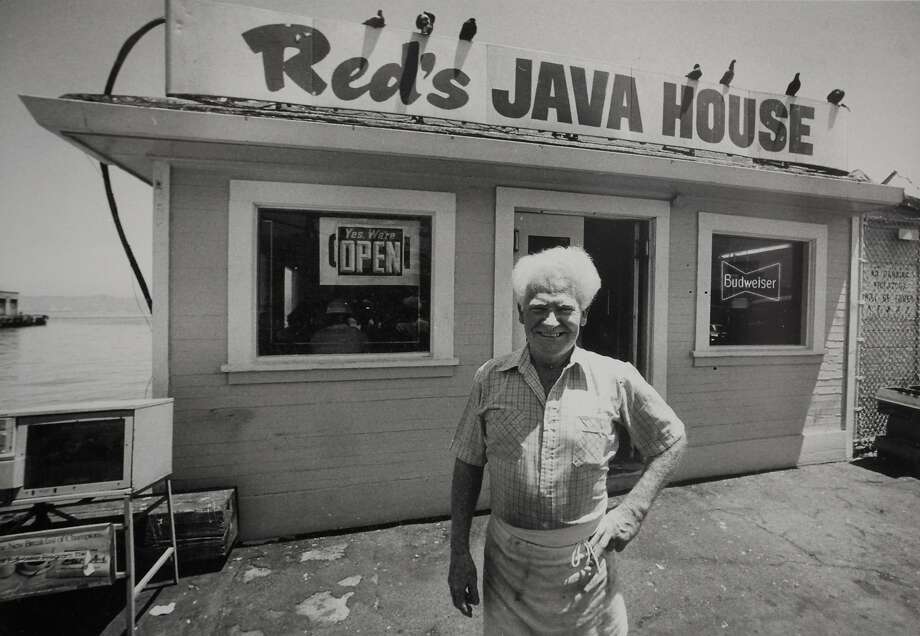 Former owner of Red’s Java House Tom “Red” McGarvey stands in front of the port side cafe during the latter years of ownership.

The joint was a hit among longshoremen and downtown office workers alike.

In 1981 The Examiner told readers that “Drinking hot coffee and looking at the sunrise on the underbelly of the Bay Bridge is an early morning sight not to miss. Even if you’ve been out all night — or maybe especially if you’ve been out all night — dancing, of course, at the Mark … Rosie, the waitress, will smile and give you a glazed donut to dunk for an extra 35 cents.”

Joe Montana stopped in for a burger before the 49ers Super Bowl victory parade in 1989.

At some point the brothers reportedly fell out, and Mike bought the similarly named Java House two piers down the waterfront.

Tom McGarvey, now with white hair, is still a customer at Red’s.

“I just spoke with Tom last week!” Pisoni says. “He had his 90th birthday here. I call him to check in. He’s a character, an amazing man.”

Red’s regulars know all the staff by name, order things not on the menu, and walk in with the exact change. The last change to the menu was over twenty years ago, when french fries were first offered. The most popular item by far is the cheeseburger, served on sourdough bread with pickles, mustard and not much else. 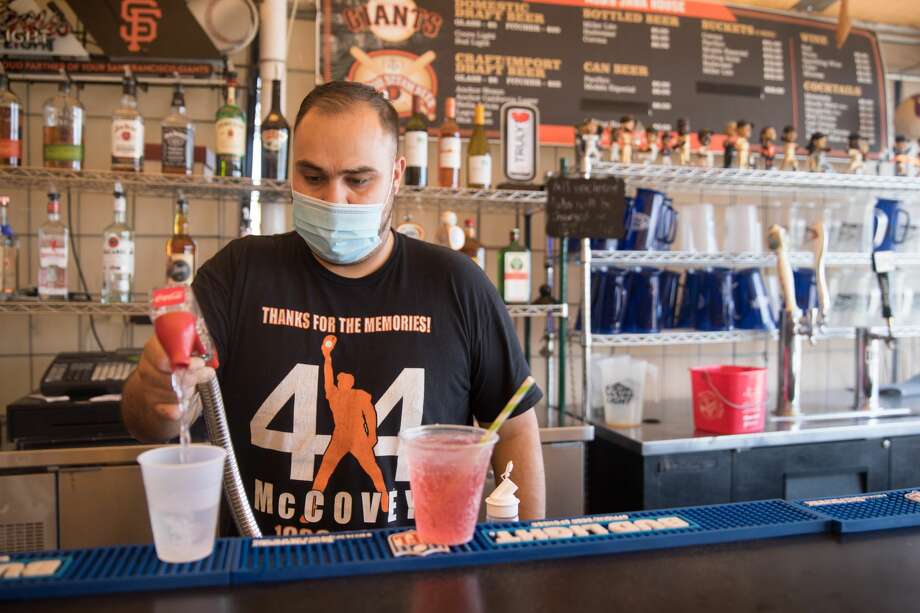 Employee Carlos Medina pours drinks at the bar of Red’s Java House on Pier 30-32 in San Francisco, California on Sept. 16, 2020.

“We don’t do lettuce, we don’t do tomatoes,” Pisoni laughs. “When out-of-towners come in and ask us to hold the tomatoes, I’m like, ‘sure thing!’”

The burger is worth the hype. I’m no food critic but it tastes like a glorious, chewy mustardy release of 2020 tension, and the million dollar view doesn’t hurt.

Anthony Bourdain once described Red’s as a “wonderful, old school, high fat, high protein, beer for breakfast kind of a place,” adding, “any time you begin to doubt the wonderfulness of San Francisco, really, all you gotta do is come here.”

With the passing crowds from Giants games and FiDi lunch break diners thinning out due to the pandemic, Pisoni has changed opening hours to suit whenever people come to Red’s.

“People have started coming a little later after working from home, so we stay open later; like I said, San Franciscans run this place,” she says. “If they’re here, we’re staying for them.”

Red’s has survived a lot. A massive fire destroyed the pier in 1984, but the restaurant was saved by the SF Fire Department’s fireboat Phoenix.

The Loma Prieta earthquake that collapsed a steel section of the Bay Bridge couldn’t even damage the scrappy little shack that lives in its shadow.

Pisoni is sure Red’s will make it through 2020, as will San Francisco.

“We’re a resilient city, we’re gonna come back,” she says.

Chef Carlos Medina brings us drinks as Pisoni tells me that Red’s has managed to keep all their employees through the crisis. “The customers know all my staff, it’s family here. My team is amazing.”

One day soon the COVID-19 testing center, the smoky skies and the masks will be gone, but San Francisco’s favorite little burger joint will still be in the exact same spot, as will the mop bucket.