Kitchen to Kitchen, a New York-based digital restaurant group, launched its second delivery-focused restaurant last month on Aug. 6. The company’s first concept, Meatball Kitchen, which started in March, and the new Sweetbasil Thai Kitchen are headquartered in a central commissary kitchen in Garland, in one of Revolving Kitchen’s 25 commercial cloud kitchens available for rent.

The restaurants are the beginning of five total ghost kitchen concepts the company plans to open in Dallas, the city they chose to establish national operations. 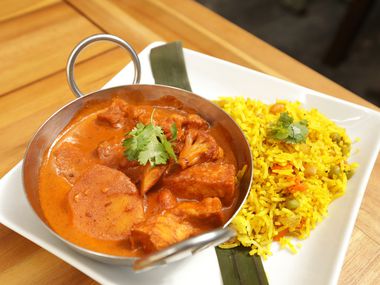 Kitchen to Kitchen, on the other hand, set their wheels in motion in January, before the pandemic, because as marketing director Ben Green explains, “delivery sucks,” historically. Oftentimes, restaurant food sold to-go isn’t built to withstand a long car ride. It’s also expensive, and not to mention bad for the planet.

Kitchen to Kitchen’s mission is to revamp delivery by selling food designed to be as delicious when opened at dining room tables as it was when it left the kitchen, Green says.

Deliveries are packed in paper bags with recyclable, reusable to-go containers. Each order includes a personalized, handwritten thank you note. The company’s motto is: hospitality, delivered. “The whole interaction is designed to make customers feel taken care of — because food is an expression of care,” Green says.

Green says Kitchen to Kitchen’s leadership chose Dallas to test their concepts because “Dallas is America’s greatest food city” with “a lot of talent and discerning palates.”

The company is co-founded by Dean Furbush, formerly the CEO of Fresh Direct. His vision is to prioritize a work culture of respect and sustainability for everyone connected to the company — from contractors to the planet.

“We’re excited to be in Dallas and launching these concepts here first with its core ethos being care, hospitality and unconditional respect across the board, and especially in a city known for its southern hospitality,” Furbush says in a press release.

Thaddeus Duprey is also a Kitchen to Kitchen co-founder and the company’s Chief Product Officer. Before beginning a corporate role at Blue Apron, where he was Director of Quality, Duprey cooked in restaurants including Napa Valley’s Meadowood the year it was awarded three Michelin stars. Duprey is responsible for Kitchen to Kitchen’s recipe development, like the hand rolled meatballs, and he collaborated with Thai chef Nan Bunyasaranand to create Sweetbasil’s menu.

Sides that pass the delivery quality test at Meatball Kitchen include “arancini mozz tots,” with white wine risotto and mozzarella cheese filling, along with the popular polenta fries. Green describes the fries as “crispy yet melty, a cross between a french fry and a mozzarella stick.”

Delivery is offered via GrubHub, Uber Eats, DoorDash and Favor from Revolving Kitchen in Garland, as well from their first restaurant partner, the Local Oak in Bishop Arts, which also sells Meatball Kitchen’s menu.

For Alycen Cuellar, owner of the Local Oak, partnering with Kitchen to Kitchen was “all about good timing.” After surviving three years of construction on the streets outside her restaurant, the pandemic hit. Upon meeting Furbush and visiting the central kitchen where she saw everything being made from scratch, she decided to try offering another menu in addition to her own, which she had been forced to limit due to lack of ingredient availability and unpredictable demand.

Even though she admits it was hard at first to begin selling another company’s product, the extra income stream from Meatball Kitchen is better than what she thought it would’ve been.

As Cuellar says, “The restaurant industry is changing so fast. Innovation is key.”