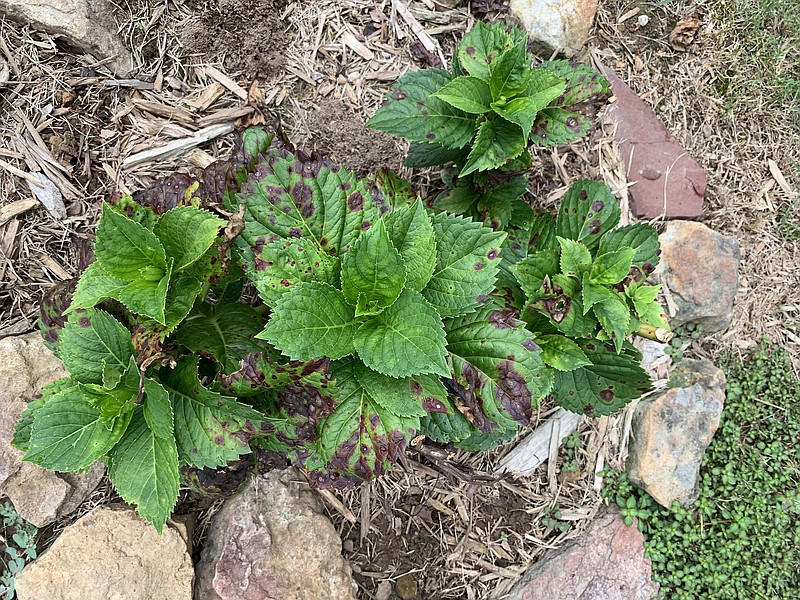 These hydrangeas have Cercospora leaf spot, a fungal disease common on the plants. (Special to the Democrat-Gazette)

Q I have these three hydrangea plants that have these black spots on them. They are planted along the same side of our house that faces east, so get morning sun and afternoon shade and watered about twice a week. They started this last year. Can you tell me what is going on and what to do or not do? I took these pictures about three weeks ago, and now the largest two have suddenly thinned out a lot but still have a few blooms and new growth. Help! I am new to gardening.

A Your hydrangeas have Cercospora leaf spot, a common fungal disease of hydrangeas. This late in the season, I would try to ignore them. I know they don’t look attractive, but it is too late to start a spray program. Our recent hard rains made the problem worse. This fall, as the leaves begin to shed, practice good sanitation, by raking up all the infected leaves and getting them out of the yard. Monitor the plants next spring, and if you see damage early, a spray program may be warranted. If the problem occurs only late in the season, it won’t affect their blooms or growth next season; it is just unsightly. Here is a link to the University of Arkansas Division of Agriculture Cooperative Extension Service fact sheet on the problem: arkansasonline.com/919spot.

Q Can surprise lilies be dug and stored or should they be dug and replanted this fall?

A If there is a need to store the bulbs instead of planting, it can be done, but it would be much better for the bulbs to replant as quickly as possible. Be aware that it is not unusual that lycoris (surprise lilies) don’t rebloom the year after transplanting.

Q I generally treat our lawn twice a year (we’re do-it-yourselfers). I’ve been using a weed-and-feed product that makes the grass healthy, but the weeds even healthier. Someone said you recommended against weed-and-feed. What’s your recommendation for a best fall treatment and when should I apply it? Our grass is mostly St. Augustine.

A While I know that combo products seem like a time saver and an easier option, I am not a fan. If you were doing a pre-emergent herbicide in the spring, it would need to be applied well before the lawn grass greened up and could benefit from any fertilizer, so you would basically just be feeding weeds. We are at the very outside of fertilization now for warm-season grasses. We don’t want to encourage too much new growth late in the season, but one more application ASAP would be fine. If your weed-and-feed is a pre-emergent type, it could be used now, as long as the product is labeled for St. Augustine.

Q Something is “pruning” my 10- or 12-foot Brown Turkey fig tree. In July it was lush and covered with green figs. As they ripened — five or six at a time, something began to bite them off, but then in one August weekend all the figs disappeared. This week something is nipping off twigs — they look like a creature is sawing them at a 45-degree angle with a rough saw, sometimes leaving the twig dangling. Yesterday I noticed three or four but this morning many more twigs have been cut — enough that I am beginning to worry about the tree itself. What can it be and what can I do? (We live out from town and have lots of wild creatures around.) 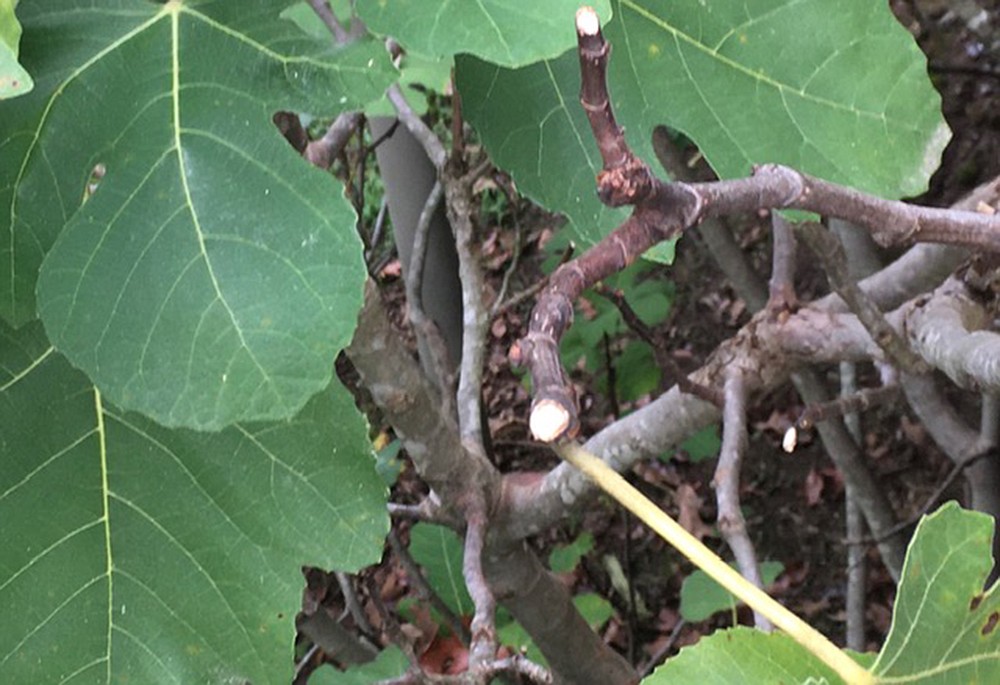 Something is stealing parts off this fig tree. (Special to the Democrat-Gazette)

A I would suspect deer, but not sure why the one branch is just snapped off. It could be raccoons too. I put bird netting around my fig when the fruit is beginning to ripen and that has helped, even with squirrels. You might also try using one of the spray animal deterrents. Plantskydd is one that many gardeners are having success with. Good luck.

Q What is this invasive weed that is taking over my yard? It has long runners with little white blooms and seed pods. How do I get rid of it? Weed-and-feed hasn’t curbed the problem in the past.

Virginia buttonweed is a persistent weed with an extensive root system. (Special to the Democrat-Gazette)

A You have a tenacious perennial weed called Virginia buttonweed. It prefers low and, often, moist areas. It spreads prolifically and roots as it grows. Pre-emergent products don’t work because it is not coming up from seed but from the root system, which can be quite extensive. Herbicides provide only temporary suppression. Multiple applications of a three-way herbicide containing 2,4D, MCPP and dicamba can help.

Retired after 38 years with the University of Arkansas Cooperative Extension Service, Janet Carson ranks among Arkansas’ best known horticulture experts. Her blog is at arkansasonline.com/planitjanet. Write to her at P.O. Box 2221, Little Rock, AR 72203 or email