Average property prices continued to fall across the country last month, with the property market more subdued than at any time since 2010, a report suggested today.

Nearly a third of estate agents and surveyors said they saw average prices drop in the last three months, marking the worst performance in ten years, the Royal Institution of Chartered Surveyors said.

England’s property market having been unlocked on 13 May, although with lockdown restrictions on the market still in place across Scotland, Wales and Northern Ireland. Queries from potential new buyers and sales outlooks across the UK look ‘slightly’ better than they did in April, Rics added.

More than 80 per cent of insiders working in the sector surveyed said they think buyer demand for a home with a garden or balcony will grow significantly over the next two years as a result of lockdown restrictions. 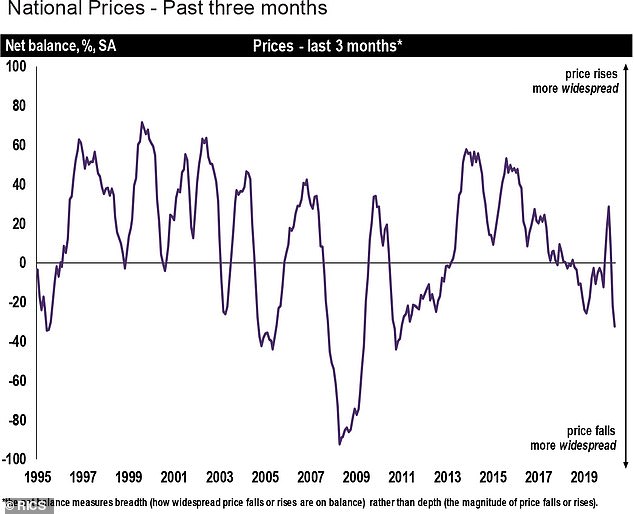 Price matters: A chart showing the impact of the pandemic on house prices so far

Nearly three-quarters of property insiders surveyed think demand for a home near a green space like a park will rise over the next two years, while 68 per cent believe properties with more private space and fewer communal areas will be top priorities among potential buyers.

The desire to get outdoors during lockdown has triggered a drop in the number of buyers looking for a home in a block of flats, the Rics said.

Nearly 80 per cent of estate agents think buyer demand for a home in a tower block will fall over the next two years, while nearly 60 per cent believe properties in urban areas which are very built up will also become less desirable to prospective buyers.

The majority expect no change in the desirability of homes near transport hubs, such as train stations and bus stops. 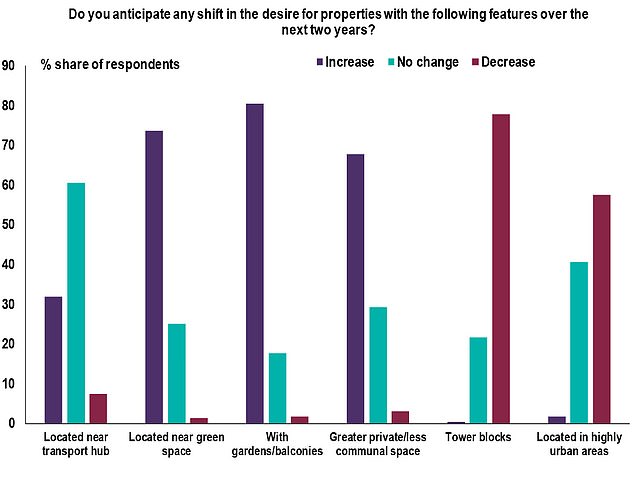 In demand now: Over 80 per cent of insiders working in the sector surveyed said they think buyer demand for a home with a garden or balcony will grow

Simon Rubinsohn, Rics chief economist at the Rics, said: ‘There are already signs that those looking to buy a house are responding to the conditions created by the pandemic by seeking out properties with gardens or balconies and nearer green space.

‘These and other similar features are likely to increasingly command a premium over higher density urban locations according to respondents to the survey.’

The property market may have been reopened in England last month, but it has been turned on its head.

In-person viewings are being carried out with social distancing measures in place, with some estate agents choosing to simply leave buyers to look round homes themselves while donning face masks.

Many estate agents have also been ramping up the number of online virtual property tours they carry out, even though it remains unclear how many will lead to cash on the table and a deal in the bag.

Rics’s survey for May found that a net balance of 5 per cent of surveyors reported a drop rather than an increase in queries from potential buyers.

This was a marked improvement compared with April, when a record low net balance of 94 per cent of surveyors reported buyer inquiries dropping off.

Property website Rightmove said it enjoyed its busiest ever day on 27 May, with over 6million visits to its site on this day alone, marking an 18 per cent increase on a year ago. The property website said it had also seen a surge in emailed queries and telephone calls from potential buyers.

Miles Shipside, Rightmove’s commercial director, said: ‘Usually, we record our busiest days of the year in January and February and almost never when there is warm weather.

‘So the combination of pent-up demand being released, new people entering the market and no half-term holidays during lockdown has led to this late spring boost.’

Speaking to This is Money, Becky Fatemi,  a director at high-end estate agent Rokstone, said: ‘It was inevitable that during the lockdown people were going to spend more time on their property searches. With other industries still frozen this focus will continue. Those homeowners and tenants who have been stuck in a property with no balcony, garden or spare home office/bedroom will be motivated to move.

‘Overall we have recorded a 33 per cent increase in the level of activity across both sales and viewings on this time last year.

‘We have seen a spike in enquiries compared to the pre-lockdown period in the £5m to £10m bracket with British, European and American buyers looking for three bedroom properties with outside space.’

In the Rics’ latest findings, nearly a third of surveyors said they had seen property prices fall rather than increase in the last three months. This is the weakest level the reading has been since 2010, the Rics said.

Looking ahead, a balance of 16 per cent of surveyors expect house prices to fall rather than increase over the year ahead.

Mr Rubinson said: ‘Following the reopening of the housing market in England, pre-Covid sales that were in the pipeline are now largely going through.

‘This is encouraging but it remains to be seen how sustained this improvement will prove. 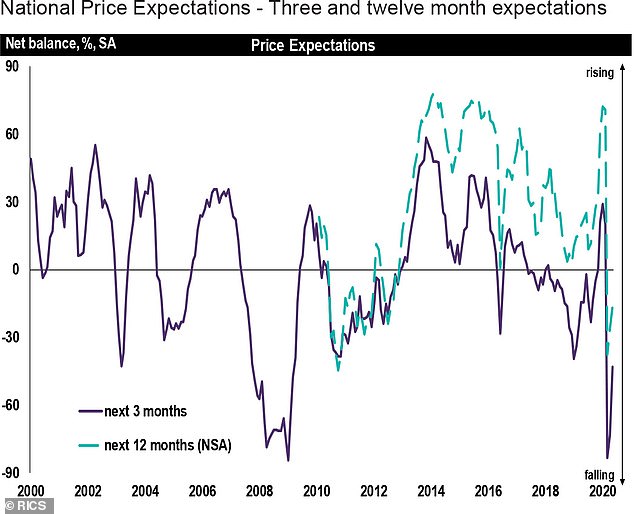 Forecasts: A chart from Rics showing property price forecasts for the next year

‘Much will inevitably depend on the macro environment and, in particular, the resilience of the jobs market as the furlough scheme unwinds. For the time being respondents to the survey see the trend in transactions being broadly flat.’

Since the pandemic started to rock Britain, a string of forecasts concerning the property market have been published, with many experts believing prices will drop significantly over the next year.

While this could spell good news for prospective buyers, mortgages, particularly for first-time buyers, could become harder to get hold of as bank and building societies toughen up their lending criteria.

Jeremy Leaf, a north London estate agent and a former RICS residential chairman, said: ’’The reality is that many sellers are reluctant to reduce the price substantially as around four out of five tend to be buyers too. They will only consider price drops if they can secure a similarly good deal on their next property.

Liberum: Fall of 7% in real prices

‘Overall, first-time buyers in particular seem more nervous about employment prospects as the furlough support falls away. We are seeing more demand for smaller family houses where buyers are taking a longer-term view of market prospects.’

The Bank of England thinks house prices could fall by as much as 16 per cent this year, while Lloyds Banking Group forecasts a drop of up to 10 per cent. Others like the EY Item Club and estate agent Knight Frank are predicting a lower decline of around 5 per cent.

On Wednesday, the Organisation for Economic Cooperation and Development said it thinks Britain will suffer the worst economic decline as a result of the pandemic out of all developed countries.

A slump in the UK’s national income of 11.5 per cent this will outstrip the falls in France, Italy, Spain and Germany, the Paris-based think-tank said.

Millions have been furloughed and with swathes of future job losses on the cards, the extent to which the country’s housing market will be able to bounce back with gusto any time soon remains fraught with challenges and uncertainty.

On 20 May, the Office for National Statistics reported that nationally, average house prices increased by 2.1 per cent in the year to March, up slightly from the 2 per cent rise the previous month.

In London, average property prices increased by 4.7 per cent over the year to March, marking the biggest annual rise seen since December 2016.

The ONS has suspended its closely-watched house price index ‘until further notice’, with one having originally been due to be published on 17 June.

Some links in this article may be affiliate links. If you click on them we may earn a small commission. That helps us fund This Is Money, and keep it free to use. We do not write articles to promote products. We do not allow any commercial relationship to affect our editorial independence.