2020 has been a homeowner challenge like no year before it. In light of 2020’s safety issues, economic downturn, quarantine life, and more, what does the data say about recent homeowner trends? We dug into the numbers to find out.

So Much to Do, and Suddenly So Much Time

Did sheltering in place have any effect on home improvement rates? Our data says yes.

Over half of American homeowners (55%) said the pandemic and associated disruptions gave them time to improve their homes, while 59% admitted that spending more time inside due to lockdown inspired them to renovate their place of residence.

What’s the stated reason? “Finally having the time” was the top motivator, with 25% of homeowners saying that’s what drove them to go ahead with their improvement and remodeling projects.

Impressively enough, it ranked above the more typical drivers of home improvement, such as adding value to a home (21%) or making a home feel more comfortable and cozy. (21%).

What projects did people dive into? Garden landscaping topped the list of home projects, as 26% of homeowners surveyed said they worked on their gardens during the pandemic, while 18% fixed up their lawn.

Likely due to increased reliance on the internet for working and talking to friends and family, more than one in five (21%) US homeowners upgraded their broadband internet – making it the third most common improvement since the pandemic began.

Click through the tabs on the chart above to see the most common improvements in each category!

Also likely due to spending more time indoors than usual, many decided to repaint (23%), add new lights (16%), and upgrade their kitchens (14%).

Equally on par with traditional renovations, many chose to bring more technology into their homes too, with 16% installed security cameras, while 13-14% added smart lighting and smart doorbells.

Cash, Credit, and COVID Checks to Help With Costs

Money was tight given the economic downturn, but that didn’t slow down some people. American homeowners spent a median amount of $17,140 on improving their homes since the pandemic began, with an average of five improvement projects per household.

Where did people say they got the money? To fund their renovations and remodeling projects, 38% dipped into their savings, 23% used a credit card, while as many as 13% used the government stimulus check to finance their home improvement.

A total of 41% went into some form of debt to finance their home renovation projects, and no wonder when nearly half (46%) cited lack of funds as a key barrier to improving their home, and 35% said they didn’t make improvements because they lost income due to COVID.

Adapting to the New Normal 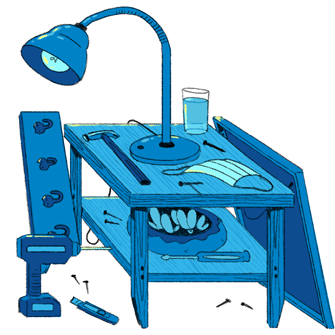 Did COVID force some people to make any mandatory upgrades? Some did. Almost a third (31%) noted they were forced to make changes due to the new way of life under COVID. Some 11% said they made changes to allow for working from home, while 7% made changes to help with homeschooling.

Since the start of the pandemic and looking ahead to the next 12 months, American homeowners have either already added or are planning to add:

These statistics likely suggest that homeowners want to ensure their homes can serve multiple purposes by acting as offices for their work, classrooms for their school-aged children, and fitness centers for their leisure.

New home, new you. Even though staying at home more can make one appreciate it the way it is, as 24% of surveyed homeowners would testify, most aren’t done! Many people are keen to keep the renovations going for the foreseeable future.

As if the last three months of uptick weren’t enough, 78% of homeowners surveyed are set to undertake at least one home improvement project in the next 12 months, averaging potential improvements per household.

Tho thirds (66%) will be focusing on renovating the interior, 63% plan to renovate the outside, and 54% intend to add home tech and smart appliances into their homes.

Amidst a Pandemic, a Boost of Eco-Consciousness

Whereas the renovations American homeowners are planning to make aren’t that dissimilar to the renovations they’ve made since the COVID pandemic started, an interesting trend emerges from our data.

Overall, four in ten (40%) Americans who own a home are planning to make it better for their environment. Leading the charge are, unsurprisingly, Millennials and Gen Z, where 56% are planning eco-conscious renovations. Gen X’ers, however, are not far behind with as many as 43% sharing the same mindset.

For better or for worse, the COVID pandemic gave Americans time and opportunity to improve their homes to an extent few imagined.

As the situation around the reopening of the country remains uncertain, there’s one thing most homeowners know for sure: whatever the circumstances, they’ve continued making their homes better, smarter, and greener in 2020, with no signs of stopping.

We surveyed 1,083 homeowners in the United States aged 18 and above. The survey had a nationally representative sample and was carried out by Savanta between July 7-9th, 2020.

Generations were defined as follows: