Another week has gone by, and it’s already time to write this column and get it on its way to my editors. Once again, I’m pushing the deadline . . . it must be that I work better under pressure because it seems I so often push it off until the last minute. Or maybe that is what a lot of mothers do. Is it because we decide our family is more important than anything else?

We had a few cloudy, rainy days and now our solar battery alarm is beeping out in the pole barn. That means the generator has to be started in order to recharge the battery pack. Our water pump is run by our solar battery. So far, we have water, but as soon as it gets to be daylight, someone needs to go get gas at the gas station. Yes – at 11 p.m. last night, after everyone was already in bed, daughter Loretta could hear the battery beeping. It was too late for anyone to go get gas, the gas stations near us were closed, and we didn’t have any gas left in the jugs. Of course, during the night hours no one was using water, so it was okay until this morning when activity began again. I am waiting to take a shower until the gas is here. I do not want to risk running out of water in the middle of a shower. Hopefully once it’s daylight, the sun will come out, but the generator still needs to be started to help get the charge back in the battery pack.

Daughter Susan and children were here yesterday. Son-in-law Mose had a doctor appointment about his finger. The doctor took the stitches out but wasn’t too happy with how it’s healing. So still no “OK” to go back to work. Susan brought her laundry and washed it here. We will wash ours today if it’s a nice day.

Daughter Elizabeth and children have plans to come today. Our oldest granddaughter Abigail (Tim and Elizabeth’s daughter) will be four years old tomorrow, Sept. 10. Abigail is a sweet little girl who is at the stage where she asks one question after another – and then asks, “but why?” We love her so much, as we do the four other grandchildren. We will go to Tim and Elizabeth’s on Friday evening in honor of sweet Abigail’s birthday. She gets so excited to have a birthday!

Yesterday we canned 55 quarts of vegetable juice. We didn’t make it hot, so that I can use it in place of tomato juice in soups, etc. We picked six five-gallon sized buckets of tomatoes from the garden. Potatoes need to be dug up, hot peppers picked and canned, etc. Harvesting is in full swing with the gardens. Grapes will be next on the list.

On Sunday, Mose and Susan hosted baptismal services in a big tent at their place for daughter Loretta, nephew Jacob, and another young boy in our church district, Jeremiah. They prepared for extra people and had borrowed another bench wagon from a neighboring church district. I’m doing a rough estimate, but according to how many times we had to reset the tables, I would think almost 300 people were there in honor of the three young souls being baptized. Mose and Susan were well prepared with extra food, and we had enough for everyone. I made around two and a half big pots of coffee and we still almost ran out. This would probably total 200 cups. We also had 12 gallons of iced tea, but it was a cool day, so people wanted more coffee instead.

Also on the menu were ham, cheese, homemade wheat and white bread (60 loaves but we had some left), pickles, hot peppers, red beets, peanut butter spread, butter, rhubarb jam and cookies (four different kinds). Popcorn was served while dishes were being washed.

Mose and Susan are living in their garage, but work on the house is slowly getting done. The bedroom, living room, and bathroom are drywalled, and my husband, Joe started mudding the bathroom, so hopefully, soon we can paint that part of the house.

Until next time – God bless! I will share the recipe for “Nothings” since I have had a lot of mail asking what they are. They are a thin pasty with sugar sprinkled on top. They are almost always served at weddings in Berne, Indiana, where we moved from over 16 years ago. They are sometimes also called knee patches or elephant ears. 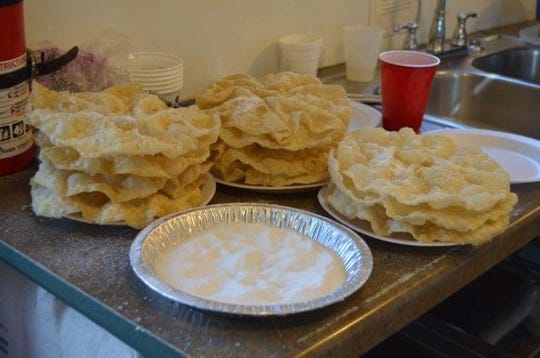 Stir together cream, egg, salt, and enough flour to make an elastic dough. Make 7–9 balls out of the dough. Roll out each ball of dough very flat and thin, about 1/16 inch. Cut six 3-inch slits, one above the other, in the middle of each round of dough.

Heat shortening in a large pot over high heat (or use an electric skillet with a temperature control). When the shortening is 365 degrees, test a small piece of dough to see if it sizzles. When the oil is hot enough, put the rolled-out dough into the pot or skillet. (Fry one at a time, unless you have a huge kettle.) When the dough turns golden on the bottom, turn once with two forks or large spatula. Remove from pot and drain on a plate covered with paper towels.

Sprinkle powdered sugar over top while warm. To serve, stack the nothings on top of one another on a plate.

One batch makes 7–9 nothings. For a wedding, we would make 12-15 batches or more as needed.

Lovina’s Amish Kitchen is written by Lovina Eicher, Old Order Amish writer, cook, wife, and mother of eight. Readers can write to Eicher at PO Box 1689, South Holland, IL 60473 (please include a self-addressed stamped envelope for a reply); or email [email protected] and your message will be passed on to her to read. She does not personally respond to emails.