A fire in Alabama State House on forced the evacuation of the building on Friday morning.

No injuries were reported, and physical damage appeared to be minor, said Pat Harris, the Secretary of the Alabama Senate. Montgomery Fire/Rescue said Friday that an overheated exhaust fan in a third-floor bathroom appeared to be the cause. 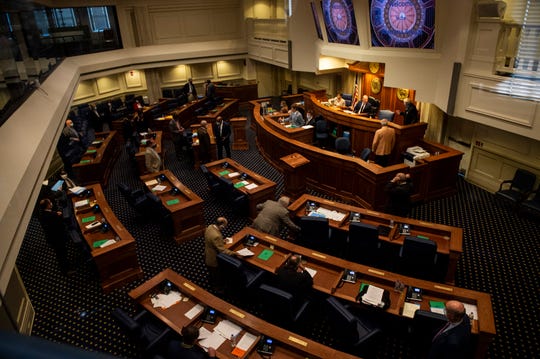 The Alabama Senate restarts the session at the State House in Montgomery, Ala., on Monday, May 4, 2020.  (Photo: Jake Crandall/ Advertiser)

“It was a lot of smoke and a little bit of flame,” said Harris. “But the Fire Department was very responsive and got everybody out.”

The fire is the second in the State House in the last two weeks. A fire broke out in Harris’ office last week.

“It’s electrical problems,” Harris said. “The wiring in the building is old. The fire in the office – that outlet had been in there since 1985.”

Harris said staff would check to ensure fire alarms were up to code and up to grade.

The Alabama State House, the old Highway Department Building, became the home of the state Legislature in January 1986. Officials intended the move to be temporary to allow renovations of the State Capitol to move forward. But by 1992, the move had become permanent.

The building faces several issues. It is difficult for the public to access and has mold issues. In May 2009, the lower levels of the building flooded in a major storm, forcing the Legislature to move back to the Capitol for a single day.