ACU happy to be playing football

When Abilene Christian ventures into the Sun Bowl to take on UTEP on Saturday, the game will be one of the more unique Division I games ever played, which is apt for one of the most unique years in college sports.

The Wildcats are kicking off their fourth season under coach Adam Dorrel and its eighth in the Division I FCS, and will be playing their first game of the year against a UTEP team playing its third.

Adam Dorrel, who won three Division II championships at Northwest Missouri State in the middle of the last decade, is in his fourth year at Abilene Christian (Photo: Jeremy Enlow/Abilene Christian athletics)

“I’ve never been involved in something like that,” Dorrel said.

For the Miners, the challenge in this one is putting together a scouting report based on last year’s 5-7 Wildcat team. For Abilene Christian, which is one of 13 FCS schools that put together a renegade schedule in a fall where the FCS is nominally shut down, there are a myriad of challenges.

“The thing we’ve addressed internally is game conditioning, game speed, you can only simulate that so much,” Dorrel said. “Obviously UTEP has a huge advantage over us there.

“Game conditioning, you can run to the football, you can condition, you can do all that, but game conditioning is different when you have to be violent with your hands, then have to turn around and play a snap again. We’ve done things internally to address that.

“There’s no way we can have kids go out there and play 65, 70, 80 snaps and think that individual is going to play well and they’d be potentially opened up to injuries. I feel good about our plan.”

As to the decision to play, the team wanted to, the university wanted to accommodate them and made it happen.

He feels good about it because, like the third-year system at UTEP, Dorrel said he feels like he’s generating the depth he wants as he gets his program in place.

That even goes to quarterback, where Sema’J Davis, who played extensively last year in a running quarterback role, will split time with Iowa transfer Peyton Mansell. Both are dual-threat runner-passers. 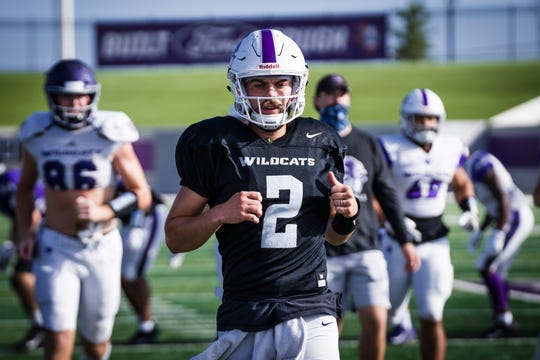 “We’re going to play them both,” Dorrel said. “The mindset of our football team is everybody needs to be prepared to play 40 snaps as hard as they can. We’ve got 10 d-linemen who are going to play, we have eight (offensive) linemen rotating, three running backs, seven receivers, three tight ends, eight DBs, six linebackers.

“You better have your program ready with you to get jersey numbers because we’re rolling kids in and out.”

That’s a difficult task for an FCS team with fewer scholarships but Dorrel and his players feel good about where ACU is.

“Once of my biggest concerns coming down from an FBS power five school to the FCS was I didn’t want to go somewhere where I didn’t feel the commitment level was the same,” said Mansell, whose close friend, Belton High School teammate and ACU tight end Remington Lutz played a factor in getting him to Abilene.

“I realized quickly that wasn’t going to be the case here. We have core values, standards of toughness and discipline. Everybody on the team has done a good job embracing that. Guys are selfless, tough and disciplined. We have a good group of guys who have embodied that.”

Another thing that Mansell liked was a system that lets him use his legs. He’s had to learn it quickly but that has come along.

“It’s definitely a challenge, being in one offense for three years then transitioning to a new one without the opportunity to go through a full spring ball,” Mansell said. “But the whole offensive staff has been good about pulling me along, giving me tips and tricks to learn everything faster.

“One of the reasons I came here over other places, the offense, even though it’s a little different from what we did at Iowa, the core is similar. It’s still a pro-style system, but it’s a little more shotgun and I’m gong to be able to do more with my legs.

“After watching some of the games last year with Sema’J and what he was able to do, I fell in love with the offense.”

That offense could be particularly fun to run Saturday, as Dorrel hinted there could be some wrinkles in the form of gadget plays.

“We’re playing a bigger team, that puts us in the mindset of, ‘We don’t have anything to lose, let’s go,’” he said. “Let’s throw the kitchen sink at them and do what we have to do. Quite honestly there may be some things like that.”

Most of all, ACU is amped up about the opportunity to play this fall, and to play UTEP in the Sun Bowl Saturday.

“It can’t get here soon enough,” Dorrel said. “Yesterday I had to stop practice, ‘You guys need to save that for the game.’ It was an intense practice. We’re at that point no more practice is going to do us any good. Our kids are very excited. I feel good where we’re at.”

“Being one of 13 FCS teams, it’s definitely a blessing. It’s so fun to have a game,” Mansell said. “When quarantine first hit it was, ‘Our we going to even get to play’ because of all the uncertainty.

“It’s going by ridiculously fast but it’s also dragging along. It’s the fastest, slowest week of the year.”

UTEP tailback Quardraiz Wadley, the opening-game starter, is out for the 2020 season with an injury. It was previously reported he would opt out of the season.

Wadley watched the second half against Stephen F. Austin in street clothes after battling a toe injury in the preseason. He missed the 2019 season to the toe injury, which required surgery.

“This is an unfortunate situation for Quardraiz and our team as we navigate the 2020 season,” Dimel said. “Quardraiz has been a great leader for our program and was voted a captain by his teammates, but he just wasn’t able to bounce back from that toe injury and get into the kind of playing shape we’re all accustomed to for the start of this season. He will be out for this season, but he will have the opportunity to come back for his senior season in 2021.”