The White House Rose Garden has been spruced up in time for its moment in the campaign spotlight. First lady Melania Trump will deliver her Republican National Convention speech Tuesday night from the garden. (Aug. 22)

On Tuesday, First Lady Melania Trump will address the Republican National Convention from the newly renovated Rose Garden at the White House, a personal project of hers. The Twitter world went wild over the weekend as tweeters provided quips asserting that the new Rose Garden, seemingly without the roses and other flowers, was a metaphor for the Trump administration — no diversity, no color, a parade ground framed by white columns only.

The Rose Garden was created by First Lady Ellen Wilson, the first wife of President Woodrow Wilson in 1913, replacing the colonial garden created by President Theodore Roosevelt’s wife, First Lady Edith Roosevelt. Famously, First Lady Jackie Kennedy brought in landscape designer Rachel Lambert Mellon in 1962 to create what most of us have known as the White House Rose Garden, a lush garden with flower beds filled with color and roses. Presidents have used the space for press conferences, weddings, and special occasions, as well as a contemplative spot during difficult times.

Melania Trump’s renovations ignore the importance of the rose

First Lady Melania Trump wanted to upgrade the infrastructure of the garden including audio visual equipment, cameras, paving, drainage and lighting, all likely in need of improvement. But she removed ten crab apple trees that lined the colonnade and swapped out the vibrant roses and flowers for roses of white, cream, pale yellow and pale pink. The result, although meant to return to Mellon’s design, is a pale reflection of history. It now appears to be largely a television stage or parade ground, devoid of texture, color or interest. We can easily imagine chairs filled on Tuesday night adorned by followers without masks, sitting too close; partisans in a home garden that belongs to the American people, not any one party. Indeed, although the Hatch Act may allow the president and first lady to use the White House for political events, all of the staff who might help out cannot do so under that law, making the use of the grounds more than problematic. 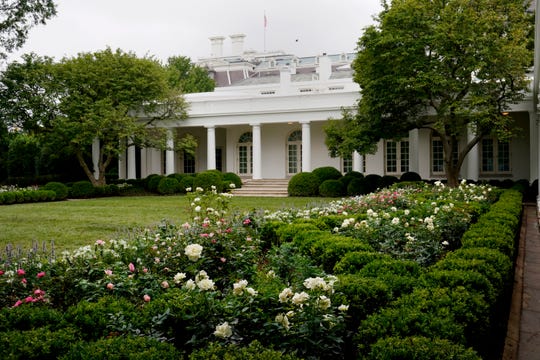 Roses, and the Rose Garden have special meaning in the lore of literature and of Washington. In literature, we all remember the famous line from Shakespeare’s Romeo and Juliet that “a rose by any other name would smell as sweet.” Many scholars believe this is Juliet telling Romeo that even if he had another name, he would still be handsome or that even though he is of the opposing House of Montague, he is still the love of her life. More generally, we use the phrase to indicate that what matters is what something is, not what it is called. So, whatever Melania Trump’s garden is called we look at the new Rose Garden and see it for what it is, bleak, soulless, austere; not the Rose Garden of our memory or the vibrant soul of our future.

The rose, named our national flower by President Ronald Reagan, has never seemed so lifeless. Amid the COVID-19 pandemic, an economic recession, the need for racial justice and climate justice, it also seems an odd time to redo the Rose Garden. Perhaps if President Trump had truly acted as a president for all of America, perhaps if he and Melania had opened the door to all Americans, we might feel that a bit of beauty in a hard time made sense. But the geometry of the revised garden, the equality of its pavers, belies the inequality of our time; seemingly mocking the chaos wrought by the Trump administration.

DNC: On racial equality, Joe Biden made the problem clear. Is he ready to do the work?

In 1967, singer-songwriter Joe South wrote the song “Rose Garden,” often called “I Never Promised You a Rose Garden.” It became a cross-over hit when Lynn Anderson recorded it in 1970, even though the producer didn’t think a woman singing it would sell. The opening lyrics seem right for our time. “I beg your pardon. I never promised you a rose garden. Along with sunshine, there’s gotta be a little rain sometime.” Our spirits are indeed dampened by the hard times in which we live. And, if the weather forecasters are correct, it may rain more than a little on our country this week. So, if we are to have a rose garden, then, it should be ours — bold and beautiful, diverse and divine, open to all and shining some light on the realities in which we live hopeful for the leader who can offer some sunshine.

Wendy R. Sherman, a Harvard Kennedy School professor and director of its Center for Public Leadership, is a member of USA TODAY’s Board of Contributors and author of “Not for the Faint of Heart: Lessons in Courage, Power and Persistence.” She was undersecretary of State for political affairs from 2011-15 and led U.S. negotiations on the Iran nuclear deal. Follow her on Twitter: @WendyRSherman